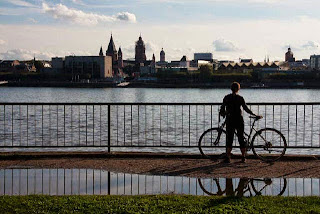 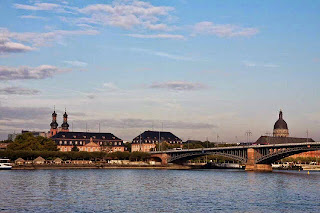 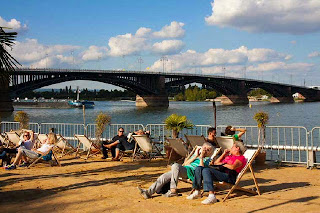 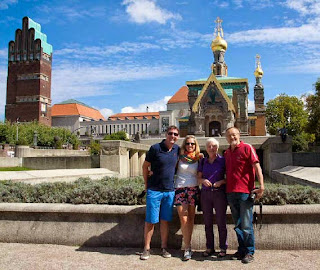 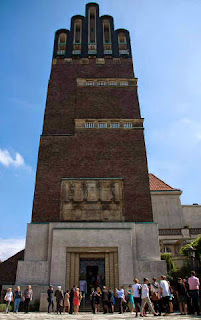 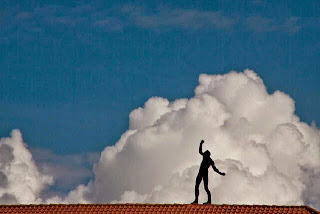 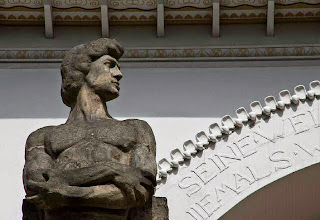 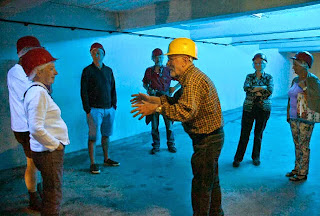 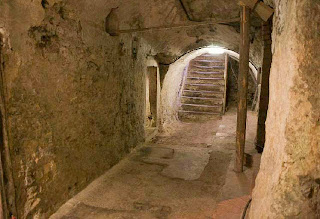 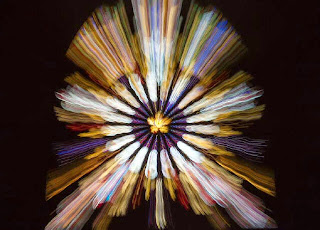 When we got to our riverside campsite at Mainz, the site looked like the WW1 battlefields of France, it was that muddy – strangely enough, it was actually reassuring to know that Zell hadn't been the only place covered by a big rain cloud. Actually, our visit combined with the end of the rain, and it was beautifully sunny for the couple of days we were there.

Like most of these major towns in Germany, Mainz is a combination of those medieval buildings that survived the war (or were rebuilt after the war), some less-than-attractive post-war buildings that had to be put up quickly, and now sparkling modern buildings that attest to Germany's economic strength. It seems a nice, relaxed and prosperous town with enough sights to keep you busy for a couple of days.

But, we weren't hanging around in the city for too long, because we were meeting up with our friends Bernd and Gisela who live nearby. They took us on a wonderful daytrip to see a few sights around the area. We went first to Darmstadt, to visit the artist colony that was set up there in the idealistic years leading up to the First World War. There was a beautiful collection of Jugendstil architecture and furniture on show there, as you could see the flourishes of Art Nouveau morphing into the streamlined designs and technological advances of Art Deco.

We next moved back in time, onto the little wine producing town of Oppenheim – a picture postcard village of medieval buildings dominated by an unfeasibly large church. But, what was above ground hadn't prepared us for the town's most interesting feature – a labyrinthine network of tunnels cut into the limestone that Oppenheim's built on. These honeycomb tunnels run for miles under the town, and were originally built as cool storage units under the houses and buildings, and then were developed into emergency shelters for the populace during the many conflicts that have affected this area. To see them properly, you need to don a safety helmet and go on a subterranean tour around the caves and tunnels – our excellent guide made what could have been a little dull, incredibly interesting.

On returning to Mainz and saying goodbye to our generous hosts, the temptation was just to chill out at the campsite. But, our visit just happened to co-incide with the opening of the Mainz Weinfest, which meant that we just had to go to the showground to do a little tasting. We were there on a Thursday, and the big nights were going to be Friday and Saturday, but it was still lively enough – there was live music and good people-watching to be done, in between quaffing some pretty good wine, of course. 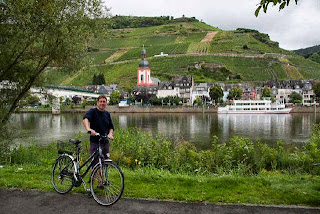 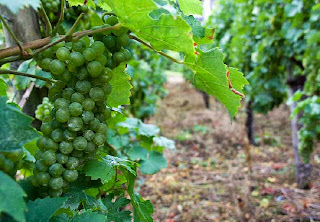 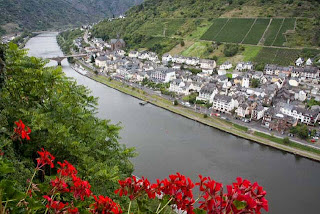 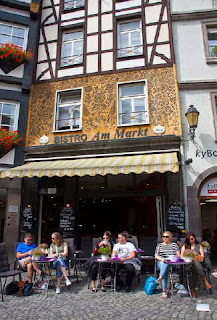 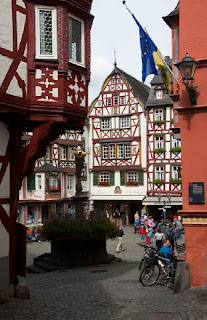 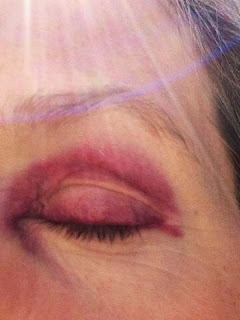 When the sun shines in the Mosel Valley, this can be one of the most beautiful parts of the world. And, even when the sun doesn't shine (which it didn't for most of our stay), it's still an incredibly peaceful and relaxed part of the world.

We were joined by our friend Anita, and stayed in the little wine town of Zell, on a site overlooking the river, with amazing views of the steep Mosel Valley, the slopes covered in a green blanket of neat vines – it was enough to inspire us to sample a few drops of the delicious local Riesling. In between rain showers, we did plenty of cycling along the river, took a train trip to Cochem (with its fairy-tale Gothic castle), and to Bernkastel-Kues (the centre of the wine land region).

On one particularly rainy day, we went to the local swimming pool to stay dry; and, ignoring the rules on the water slide, Tracy and I attempted to go down the slide together. As any parent knows, rules are there for a reason, as a resulting sickening clash of heads left me with a bump on the back of my head, and Tracy with a very nasty black eye. Ooops!