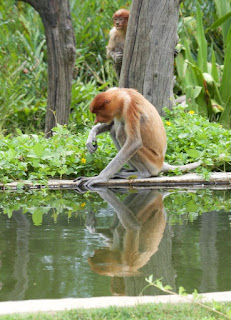 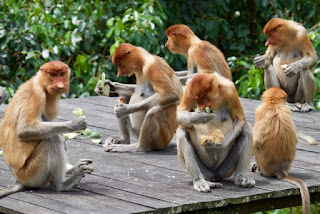 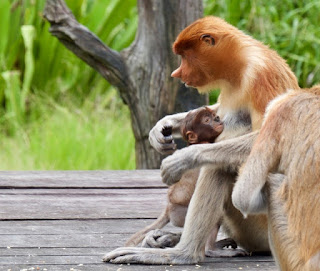 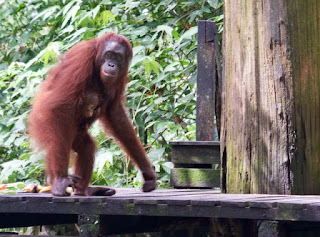 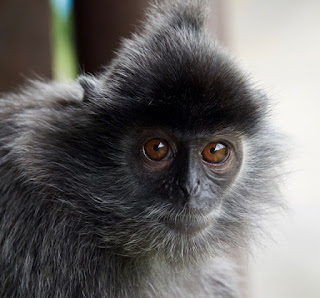 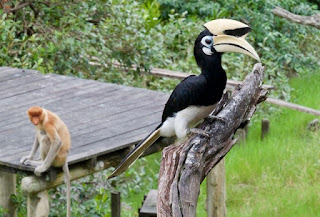 Feb 23rd – Seeing the “Other Bali” from Celukan Bawang

Today we called in at the little-visited cruise port of Celukan Bawang in the north of the island. The contrast with the South coast we'd visited before could hardly have been greater. Here, development was low key, the traffic was manageable, and the shops were mainly aimed at the locals rather than us tourists. In fact, it reminded me of Bali from when we first visited the island nearly 20 years ago.

Of course, there are reasons why development in the north is at such a relatively low level. Firstly, there's a range of steep volcanic hills that protect this side of the coast, and deter all but the most determined of visitors from crossing them – although, they certainly make for an attractive backdrop to the port. Secondly, the beaches here aren't as attractive – they're mainly narrow and consist of dark, volcanic sand; although, the waters are calmer on this side, so they're not bad for snorkelling. Thirdly, there aren't as many sights on this side of the island – there are temples (like the Beji Temple that Tracy visited), but they're not quite as spectacular as those to the South. And, finally, there aren't the same number of upmarket resorts here – most are 3 and 4 star (or below).

But, to be honest, for me, most of those are good reasons to visit the north – away from the tourist crowds and the motorbikes that clog the south and centre of the island.

So, I joined a cookery tour that visited a market in Singaraja (Bali's second biggest town), and then went to a nice beach-side hotel in Lovina (the north's biggest beach resort) to do a cookery class. We got to the market for about 9.30am, and it was already beginning to wind down, but it was great to explore its rows of tropical fruit, veg and spices without the crowds. In fact, this was an utterly untouristy environment where most people didn't speak English – but, they were really friendly, wanting to show us what they were selling, and happy to pose for photos. It was a change from other parts of Bali, where tourists can sometimes be seen as just big dollar signs, and the level of hassle can get annoying.

Then, we went to the resort, where they treated us really well - at times it seemed like there were more people looking after us, than there were guests. It was more of a cookery demonstration than a hands-on class, but in that heat this was probably no bad thing. There were plenty of opportunities to join in, but we were mostly just happy to watch and learn. The cuisine here seems to be dominated by ginger, galangal, turmeric, garlic, shallots, chilli and shrimp paste, mushed up together to make up a paste/sauce, and then this was added to lovely fresh ingredients to make a really tasty salad, and a delicious fish satay.

Of course, the best thing about a cookery class is getting to taste what you've "created", and it was every bit as good as I was hoping – I managed to plough my way through six satay sticks.

So, today made for a nice contrast with my experience the day before. This was an understated, much more personal experience, in an environment where tourists aren't made to feel that they're a part of "an industry". I wonder how long the northern part of Bali will remain like this? 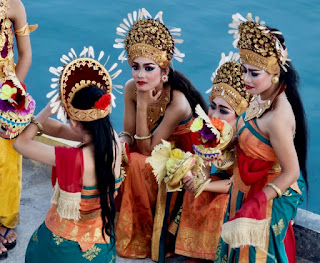 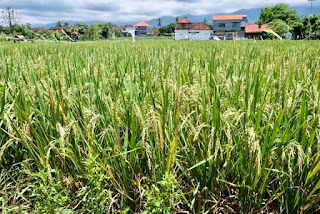 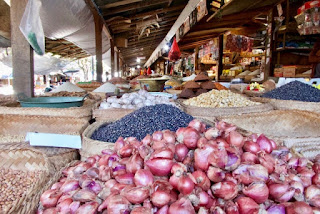 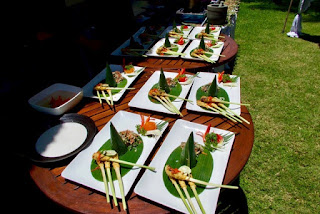 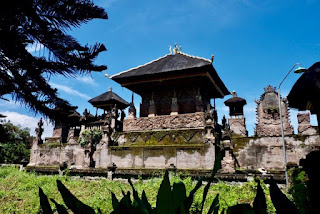 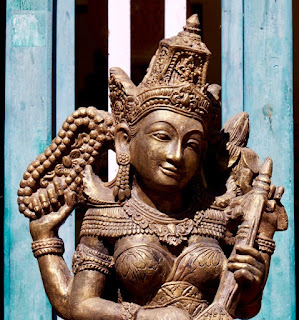 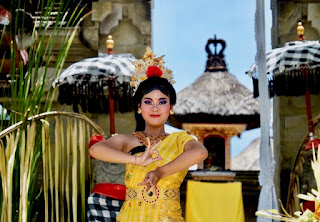 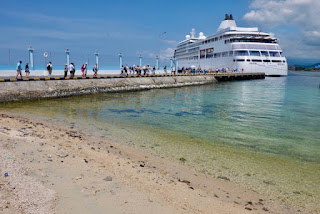 Over the last 20 years, Bali's streets have got increasingly clogged up with traffic – to the point that parts of the South of the island (particularly around the port at Benoa, plus the capital Denpasar, and the main resort town of Kuta) are now at virtual gridlock. In the south, journey times have doubled, and this beguiling island is in danger of losing its magic.

So, seeing as traffic here moves at a snail's pace, I decided to see some of the island at an elephant's pace, by joining the ship's tour to an elephant sanctuary. Of course, this being Bali, the day involved a 2-hour trip to get there, but once we were out of the urbanised areas, we were back in the "Old Bali", with its timeless landscapes of green rice terraces and rural calm.

I've been to a few elephant parks in Thailand, where you're left with a slightly uneasy feeling about the exploitation of these magnificent creatures and about the quality of the conditions that they're kept in; but here in Bali, the park seemed well run and the elephants seemed content. Of course, how am I to know if an elephant feels "fulfilled" here in captivity? But these were mainly elephants rescued from logging operators on Sumatra – so, even carrying round an overweight tourist like me on its back for a 30-minute ride six times a day, has got to be better than being kept in chains, pushing around logs.

First we got to feed the elephants, who weren't shy about giving you a nudge with their trunks to get you to hand them a piece of fruit. Even so, these incredibly powerful beasts were surprisingly gentle in taking things off you. Then we had a lumbering ride through thick vegetation (much better than in Thailand, when sometimes you're just plodding along a concrete path in what's little better than an open field).

Finally, we had a "show", where the elephants showed amazing dexterity and gentle touches in creating a painting, kicking a football, balancing on two legs or playing basketball. Again, these are hardly the natural behaviour that you'd see in the wild, but there was none of the blasting music and embarrassing audience participation that I've seen in other elephant parks, where you get the uneasy feeling that you're just seeing a circus act.

I've been to most of the major temples in this part of Bali, so today was a good chance to see something a little different. The presence of a place like this shows that Bali has well and truly arrived on the mainstream tourist circuit; but at least in this case, it's being done with a certain taste and sensitivity. As development continues, and tourist numbers soar here, it will be interesting to see if this is the exception or the norm. 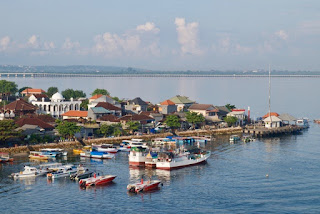 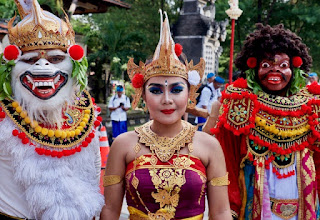 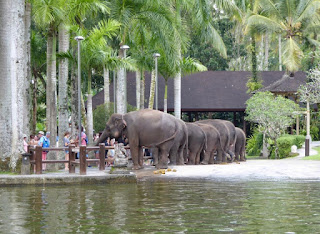 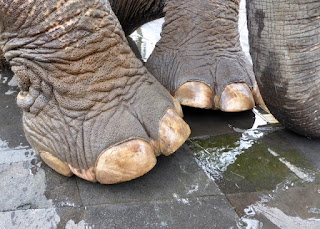 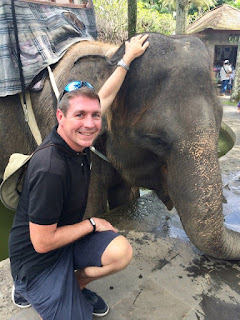 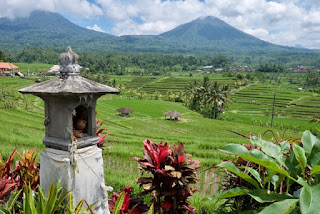 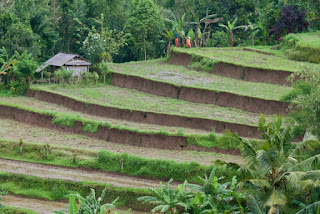 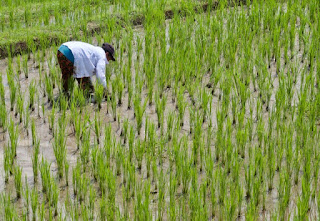