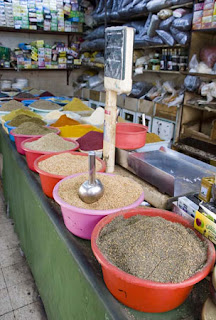 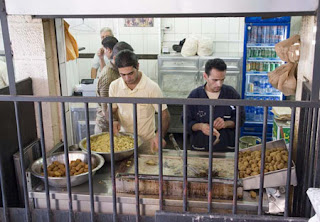 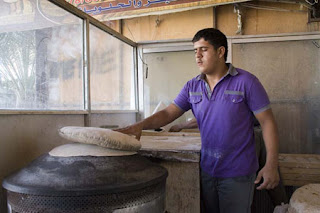 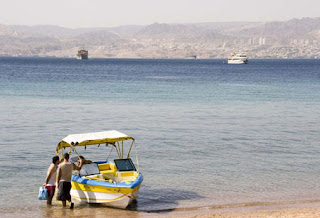 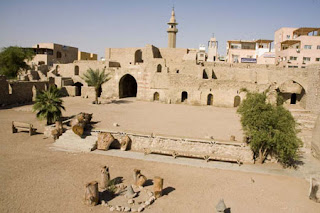 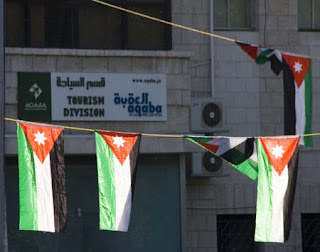 Aqaba is chiefly famous for 3 things:
1. It's Jordan's only port.
2. It was stormed by Lawrence of Arabia in World War One (inspiring that scene of Lawrence and the Arabian horsemen attacking it from the desert).
3. It provides access to the amazing lost city of Petra.

For our visit this time, we decided to explore Aqaba itself. Compared to the chaos and slightly uneasy air of being a Westerner in Alexandria, Aqaba was organised, clean and very welcoming. We wandered around the (much smaller) market, untroubled by having to worry about what you were treading in, and we'd have been much less concerned about the healthiness of the produce either if we had had to eat it. We went to a large bakery which was constantly churning out shedloads of flatbreads off an enormous conveyor belt – they were being snapped up as quickly as they could be produced, at a bargain price of about 20 flatbreads for a dollar.
Seeing all this lovely food made us feel hungry, so we decided to visit a busy outdoor restaurant for some hummus and falafels. There were four of us, so we asked the waiter to bring out enough for us – either he thought we hadn't eaten for a week or were going to be joined by another four people, but he brought out an enormous amount of food. It made you wonder if he'd deliberately over ordered so that he could over charge us, but on looking round, everyone had similar super-size portions. Of course, it was delicious and very filling and we must have left about half of it, but the best bit of the lot was that it cost less than $10 for the four of us, including drinks. Tracy almost said that she wanted to move here, on the back of this bargain alone.

We then went to Aqaba's main historic sight, Aqaba Castle. A castle had originally been built by the Crusaders, and then it was rebuilt by the Mamluks in the 15th century. Before Lawrence of Arabia and his Arab army took it from the Ottomans, it had been badly damaged by British bombardments, so it was fairly ruined; but nevertheless it was interesting to have a poke around.

Finally, we walked along the beach watching all the local boys playing in the sea, while all the women sat fully covered up on the shore, and we passed what purports to be the largest unsupported flagpole in the world (this is now the third flagpole we've encountered that's laid claim on this glamorous title).