The rugged green landscapes of Moorea make for a striking contrast to the pancake flat atolls we saw Rangiroa yesterday. That's the remarkable thing about French Polynesia – it has such a variety of scenery, that you can feel like you've ended up on a different planet as you move from island to island.So, as a contrast to yesterday's day of indolence and luxury, today was going to be all about hard work and exercise. From the pier, we walked down to one of the hotels to hire bikes so that we could combine sightseeing with a workout – seeing as it was about 32 degrees and very humid, it was like doing a spinning class in a sauna.To add to the workout, these were heavy old bikes with no gears (you had to cycle backwards to get them to brake). This was mostly fine because the coast road is predominantly flat, although in one section where you climb about 40 metres (it felt like 400!) up to a viewpoint, our heartbeats were going through the roof.But, the great thing about cycling around Moorea is that the views are always spectacular – on one side you have steep slopes of thick vegetation leading up to striking jagged mountains; on the other you have Moorea's blue lagoon, in an ever changing variety of colours. In fact, those amazing colours in the lagoon are the thing that link Moorea and Rangiroa.As we set off, I confidently told Tracy that it was "only 37 kms" all the way around the island, so if we were making good progress maybe we could do a full circuit. Fortunately, the cronky old bikes prevented us from going too fast, because on closer investigation it turned out that while I had got the number right, the units were wrong – it was 37 miles (more like 60kms), which would have killed off Lance Armstrong, never mind a couple of out of shape old shufflers who'd been over-indulging on a cruise ship for 2 weeks.Anyway, we made it past the golf course, the airport, the Sofitel Resort and got as far as Vaiare were the Tahiti ferry comes in, before prudence told us that it was time to turn back. On the way back, we called in at the wide Temae Beach where the warm, turquoise waters made for a great place to rejuvenate before heading back on the final leg of our Tour de Moorea.At the end of the day we'd ticked off 25 kms of the island, we'd ticked off mountain scenery, blue lagoons, little villages and friendly locals – all the elements that make Moorea my favourite island in French Polynesia. Moorea is a great place to relax, but it's also a wonderful place to expend a little energy. 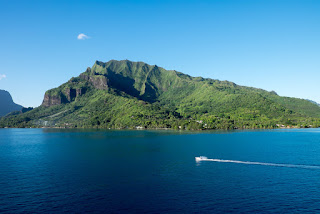 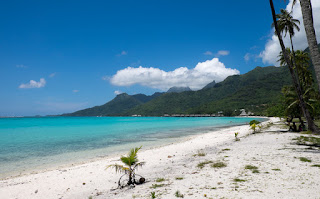 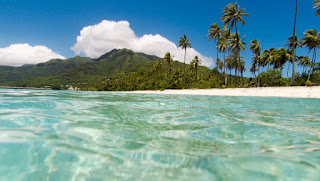 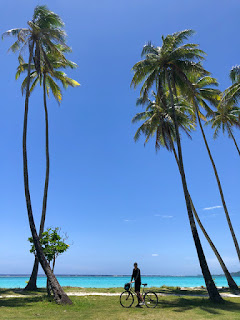 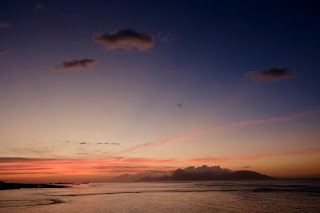