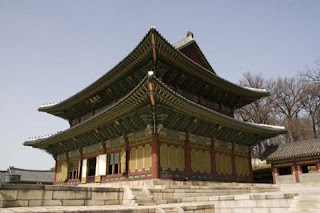 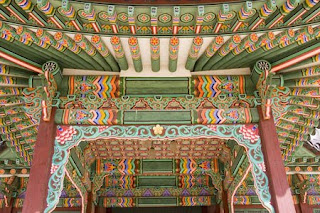 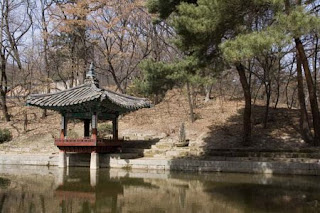 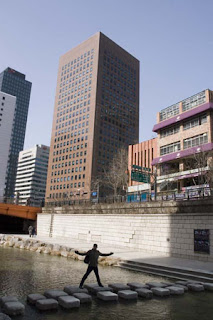 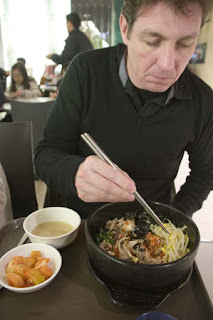 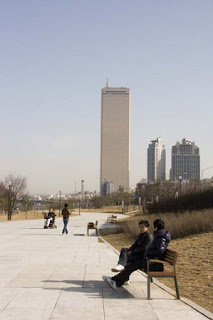 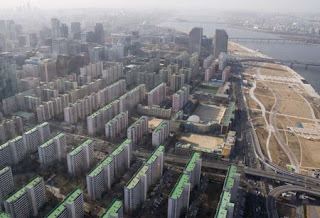 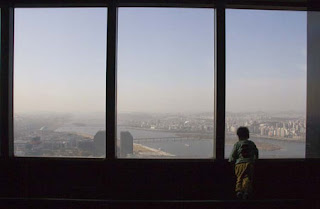 After yesterday's day of visiting the depressing side of South Korea and the DMZ, today we saw the other side of the country, by venturing to its optimistic and vibrant capital, Seoul. From the port, we took the train for the 70 minute journey to the city centre – Seoul's public transport is great, it cost 1,500 Won (less than £1) for the 30 mile journey.

When you emerge into a clean and ordered city of gleaming skyscrapers and wide roads filled with modern cars, you have to remind yourself that this city was 90% destroyed at the end of the Korean War in 1953. We walked along the pretty Cheonggyechon Stream that runs through the downtown area – the stream had previously been concreted over, but now it's been opened up and beautified, as the city tries to improve its aesthetics, after years of just concentrating on growth.

Our target was the massive Changdeokgung Palace, probably the most beautiful of Seoul's five palaces, and home to the Joseon Dynasty who ruled Korea for centuries, until the Japanese invasion in 1910. Back in royal times, the palace would have been a mini-city, staffed with thousands of servants dedicated to carrying out the King's every whim. In spite of the Japanese invasion and the damage of the Korean War, the palace complex was still full of enormous exotic pavilions, opulent throne rooms and bedchambers, painted in bright colours and decked out with fine carvings.

After all this culture, it was time for our favourite activity in Korea – eating their excellent food. We went to the enormous food hall of the Lotte Department Store, where we had to choose from a bewildering array of different kinds of food – sushi, noodles, rice, Korean barbeques, hot, cold, spicy, mild, the choice went on and on. Seeing as hardly anyone spoke English, we were kind of ordering blind anyway, but what we ended up with was delicious (I think mine was called a bibimbap).

Our final stop, was to go to the top of the city's tallest skyscraper, Tower 63, to get some views across this enormous city of 11 million people. We got the lift up to the 60th floor of the tower, and looked over the sprawling city below us, and got a good idea of why this is one of the densest populated cities in the world. Row upon row of apartment blocks stretched into the distance, each one identified by a big number on its side.

So, now it was time to get the train back to the port, and we squeezed ourselves onto the incredibly packed metro, and were jostled by the elbows of a thousand Seoulites, people who are clearly very happy to live in one of the most crowded cities in the world, and for whom the sense of personal space, is not of major importance.