September 10th – Our Camino to Santiago 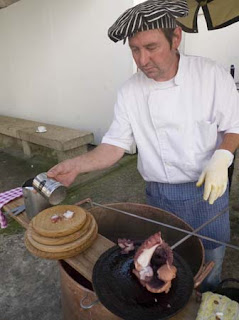 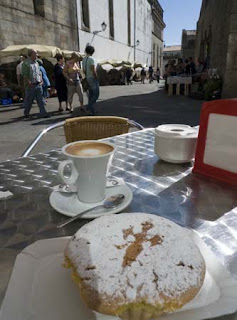 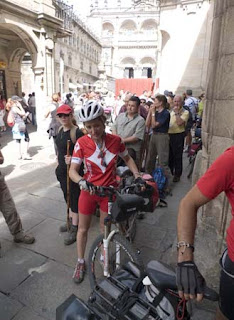 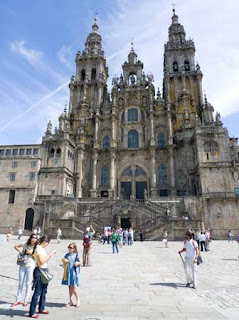 When faced with a badly injured finger, the average person will turn to God for deliverance from pain, so it was lucky that we were in Santiago de Compostela (the third most holy place of pilgrimage in Christendom, after Jerusalem and Rome), for me to pray for a fingerly miracle.

Most pilgrims to Santiago have trekked for hundreds of miles over 30 days or more, so even though I was severely injured, we rejected the option of getting the bus into town, and bravely walked the whole 3km from the campsite instead . Fortunately, it had turned back into summer again, and we had a lovely day exploring this beautiful city, full of historic churches and streets, and dodging the hordes of less-than-fragrant pilgrims, who were in various states of euphoria and exhaustion at finishing their pilgrimage.

In fact, there were so many pilgrims that there were long queues to get their certificates at the Pilgrim's Office, and an even longer queue snaking around the streets, to get into the Cathedral to embrace the statue of St James – the official end of the pilgrimage. I suspect that I'd be fairly annoyed having trekked across the whole of Spain through rain and shine for a month, only to have to wait around for hours at the final destination, due to sheer volume of pilgrim traffic.

At lunch, we sat next to a table of pilgrims whose relations had clearly been strained by the whole experience, and were now at breaking point. We kept our heads down as they bickered their way through the meal, thanking their lucky stars that they wouldn't have to spend another minute in each other's company by the end of the day. This prompted a lengthy debate about whether we would one day do the Camino – definitely not in August or September.