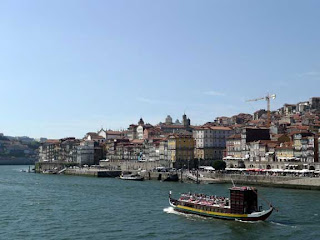 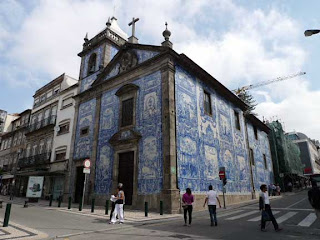 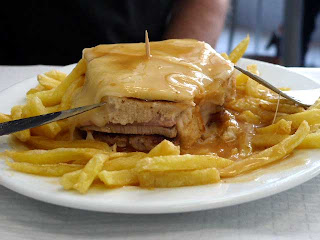 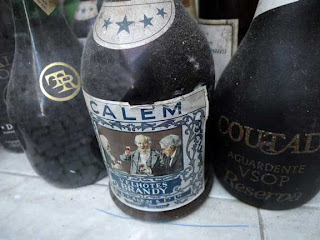 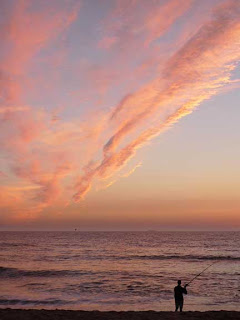 After that nightmarish sleepless night in Tuy, it was a relief to be heading for the sanctuary of a campsite in Porto. Unfortunately, our 7 year-old guidebook didn't tell us that the city centre campsite that we'd stayed in 10 years ago had actually shut down two years previously, and so, on getting there and finding that it was now a building site, we had to head for the beach area, South of the city. This proved to be a blessing in disguise, because the camp site we found was really chilled out and the beach was beautiful (in spite of the 7 year old guidebook telling us that it was badly polluted, they must have spent a lot of money on cleaning it up, and putting in boardwalks and cycle paths all along the coastline). To make it even better, Portugal is way cheaper than Spain for camping (almost half the price), while a beer watching the sun set beautifully over the sea was only €1.40.

We were joined by Sally and Dave for a few nights, so we had a fine time of talking nonsense, catching up, playing cards, and sightseeing. We went into Porto to explore its slightly run down historic and hilly streets, its blue tile covered churches, and of course, tasting some Port.

We also took the opportunity to sample Porto's most famous culinary highlight, the heart-attack-inducing Francesinha – a cholesterol-laden Portuguese carnivore's take on the croque monsieur. Basically it's a super-size Scooby snack, consisting of a sandwich containing layers of steak, German sausage, Portuguese sausage, and other unidentified meat, then covered in a thick layer of melted cheese, and then soaked with a kind of spicy, slightly fishy gravy, and of course served with a plate load of chips too. Even though it doesn't sound great, and it's the kind of meal that would even defeat Joey from Friends, I quite enjoyed it, and of course, cleaned my plate, while Tracy munched on a puny cheese sandwhich.

This meat feast definitely set us up for the definitive post-prandial tipple, a glass of port - so we crossed the Douro River, and went to one of the Port houses to have a tour round their aromatic cellars, and then have a tasting of a few glasses of Port. As someone who rarely drinks Port (and only when I'm already drunk, and then wake up with an almighty headache), it was nice to have a sober glass and get to appreciate what I was consuming for once.