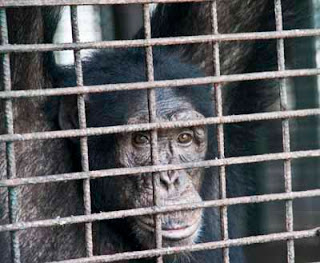 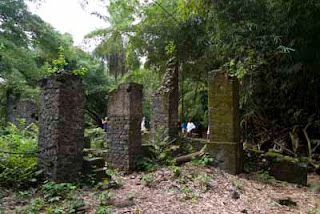 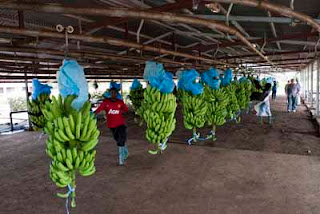 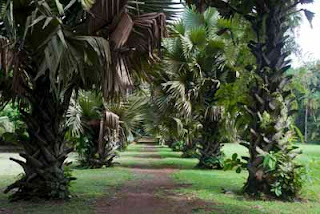 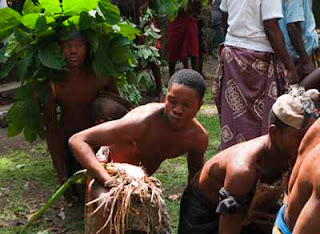 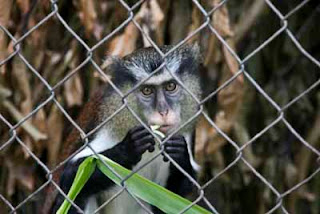 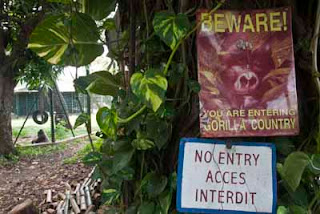 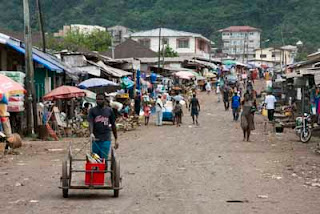 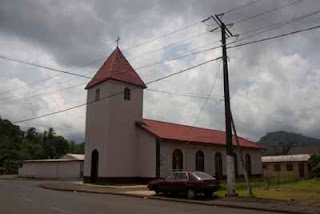 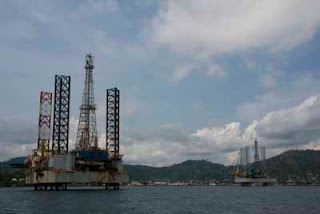 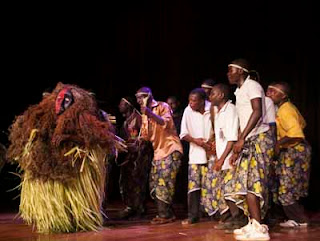 To me, Cameroon doesn't have the charm or the interesting architecture of Sao Tome, but our time in the town of Limbe gave us a fascinating glimpse into the current state of affairs of a country that appears to be stagnating under an autocratic government.

As a former part of the British Empire, Limbe is in the English-speaking 20% of the country; but, it's overpowered by the French-speaking majority, which has left it a little sidelined. Maybe the sense of frustration and powerlessness explains the grumpy attitudes of the people in the market, who shouted angrily at anyone with a camera, and generally made visiting the market quite unpleasant for most visitors.

I took the trip out of town to see the old slave market at Bimbia, an abandoned old settlement at the end of a very long and bumpy track, up and over the mountains. From where we were dropped off, we had a thirty minute hike down to the historic ruins, passing through dense forest and accompanied by a tuneful chorus of unseen chirruping birds. It was an incredibly sweaty walk, but the scenery was beautiful – enormous clumps of towering bamboos, breaking up the thick greenery, before we got to the evocative set of ruins.

This was a wretched place where slaves were assembled before being transferred to waiting ships – its stone buildings now being swallowed up by the forest to such an extent that they don't really know too much about what went on here. However, that sweaty walk to get here, stumbling along the rocky path, at least gave us some feeling of what conditions must have been like for the poor slaves who were driven for days through the tropical jungle after their capture, before being branded at the market and then sold on to the passing slavers.

After this exhausting hike, we now travelled to a banana plantation and processing plant – it was a pretty slick operation, and it was fascinating to see how the bananas we find on our supermarket shelves were selected, cut, cleaned and packaged, before making their way to Europe. The banana boats take a good 2 weeks to get to Europe (mainly to France), so the bananas are a long way off being ripe before they're sent on their way. I'll never look at a banana on the shelf in Sainsbury's in the same way again.

After this, we had a drive up the cloud-covered slopes of the towering Mount Cameroon, West Africa's tallest volcano, to look around the former German colonial capital of Buea, which is now the capital of the English-speaking province. There wasn't much evidence of either the Germans or the British here, in a fairly ramshackle town, but the presence of lots of roadside advertising hoardings (particularly for mobile phones), was a sign of increasing commercialisation.

The state of the roads wasn't too bad, until we got to a set of roadworks that sent our coach on a diversion that I thought we'd never get out of. We were sent down a bumpy dirt track by people's houses that was so narrow that the bus scarcely fitted down – people were coming out of their houses and wondering why this busload of crazy white people were going down a road that was way too small for them.

Finally we got out of this bumpy labyrinth and made it back to Limbe to visit the Botanical Gardens where we were having lunch. The gardens were nicely laid out and very ordered (they were set up by the Germans after all), and our barbeque lunch was much needed after all the morning's activities. While we ate, we were entertained by some high-energy dance performances – the most odd one involved people chewing great big lumps of bark off a dirt-covered tree root (there was no explanation for this, but I presume that it was some form of hallucinogen, judging by their crazed dancing).

Finally, we went to the Limbe Wildlife Centre, just near the port. This excellent facility has been set up to take in and rehabilitate monkeys, chimpanzees and gorillas that have been displaced by the destruction of the rainforests, by the growing demand for "bush meat" (basically people eating monkeys), and by people who've taken gorillas or chimps as pets and then suddenly realised that this was not a sensible idea.

The enclosures were spacious and well-managed, and the animals seemed content – not bored and rocking away like you see in many Third World Zoos. It was great to get so close to these huge gorillas, and to stare into their soulful eyes; while, I could watch the antics of the juveniles as they play-fought for hours.

This was a long, hot, and activity-filled day, that confirmed that Cameroon is a place with plenty of potential (it grows so much food, and it has oil too), but it has a long way to go in terms of development and fighting the rampant corruption that continues to hold it back.