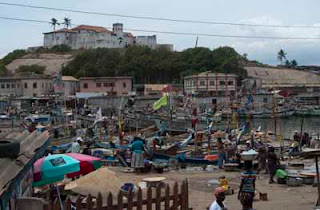 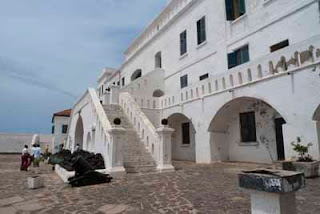 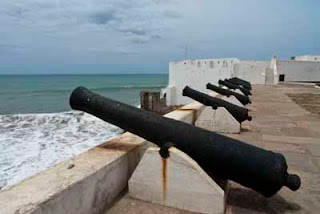 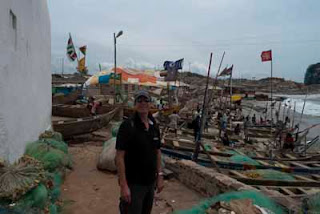 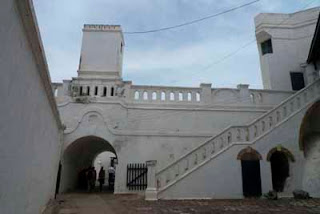 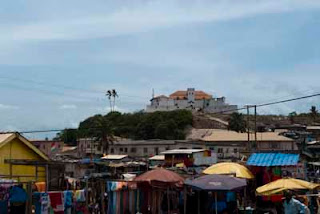 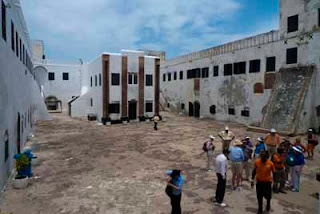 From the scruffy industrial port of Takoradi, I took the trip up the coast to explore a tragic chapter of Ghana's history, by visiting the slave castles built by the European powers in the period when West Africa's population was devastated by the evil slave trade.

Of our first three West African ports, Ghana has the best infrastructure and its roads are in a fairly good condition, so it took an hour and a half's top speed drive to get to the impressive Cape Coast Castle – the British Headquarters of the Gold Coast (Ghana's former name) from 1664 until Accra took over as the colonial capital in 1876. Before the British took over, the castle had been built by the Swedes 12 years over, and then taken over by the Danes, and then by the Dutch; which gives you some idea of the "anything goes" nature of European involvement here in Ghana. If you were strong enough, you could take whatever you liked, whether that was castles or people.

This imposing castle was a witness to one of the most shaming periods of western history, when it was the centre of the West African slave trade – a brutal trade that lasted for around 250 years, which saw up to 20 million people stolen from their communities, corralled into the dungeons of these castles, and then herded onto the waiting slave ships like animals, to be transported to the slave markets and plantations of the Americas.

Of those 20 million people, at least half never made it across the Atlantic, falling by the wayside of an incredibly brutal and inhumane process. It doesn't take you long in the castle's dark and musty prisons for those figures to become a reality. When you were down in the dank bowels of the castle, with the muffled sound of the waves crashing outside, you got a sense of the evil that was perpetrated here.

The prisoners were crammed, up to 200 at a time, into a space that felt fairly small for the 20 of us to stand in – here they had just a tiny amount of light and air, scarcely any food and water, and no sanitation facilities. Over the course of 150 years, the surface of the prison floor was raised up by around about a foot on the compacted faeces and detritus. It must have felt like hell in here. Dead bodies, of which there were many, were tossed over the ramparts into the sea.

We then passed through the "Door of No Return", the final doorway where the slaves were taken through to be rowed out to the waiting slave ships – it was terrible to think that for the slaves that had made it this far, things were only going to get worse. The ships were even more cramped and unhealthy, before they finally made it to the slave markets of the Caribbean or America.

This would have been their last ever view of Africa; and, the most perverse thing about the castle, was that it was an incredibly beautiful setting – it's imposing whitewashed walls overlooking the crashing surf and a beach full of fishing boats. At the end of the visit, I was left with a rather hollow feeling in the stomach, caused by a sense of guilt of what has been done to this continent.

From here, we went to an even older symbol of the slave trade – the Portuguese castle of El Mina. This atmospheric castle was built as far back as 1482, which makes it the oldest surviving European building in Sub-Saharan Africa. How ironic that this imposing symbol of European "civilisation", was also such an evocative symbol of the European exploitation of the African peoples.

Again, it was the thought of what happened to the slaves in those evil dungeons that will linger longest in my mind – just trying to imagine the emotions of the tens of thousands of African slaves who passed through here – ranging from sheer terror, bewilderment, physical agony, emotional heartbreak, to defiance, to hatred.

In the frenetic fish market outside El Mina, the attitudes from most of the vendors towards us ranged from unfriendliness to outright hostility - I don't know if these reactions to a bus load of white people leaning out of their coaches to take pictures of the photogenic chaos outside, were a hangover from the slave trade, or whether they saw the photo-taking as exploitation, but the reactions were quite extreme.

This was a very sobering but fascinating tour, but sights like this need to be seen to remind us why the modern world is like it is.