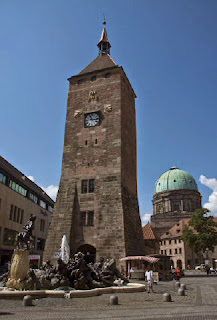 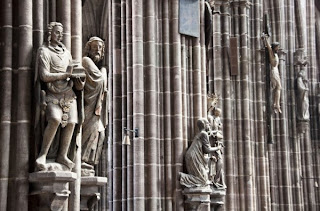 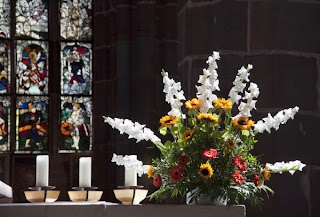 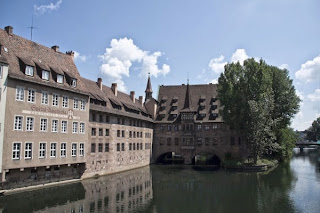 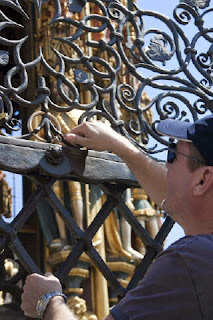 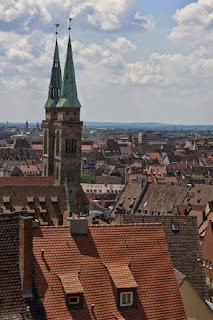 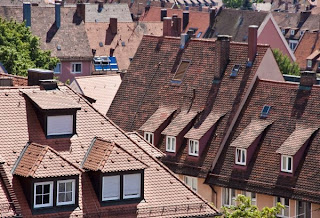 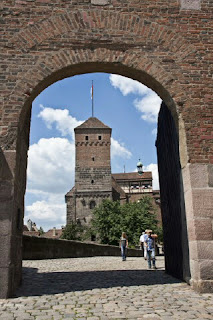 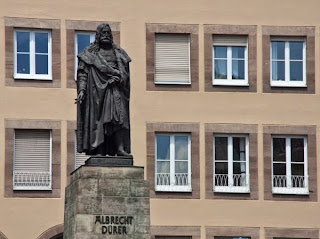 Getting held up on a shut-down autobahn for 3 hours and then being caught in a rainstorm just as we got to the campsite was perhaps not the best introduction to Nuremburg; but, after waking up to blue skies and warm weather the next day, the city proved to be a really lovely place, full of restored historic buildings, open-air cafes, and traditional bierhauses.

Of course, as the place where the Nuremburg Rallies and then the Nuremburg Trials took place, the city has become synonymous with the rise of Nazism and the Second World, but the city has bounced back really well since the war, and much of its historic old town has been carefully rebuilt after the devastation of the Allied bombs.

So, instead of exploring Nuremburg's darker past, we decided to use our visit to find out more about the city's most famous citizen, the 15th century painter, Albrecht Durer. On her history of art course, Tracy has spent quite a bit of time studying northern Europe's first "Renaissance Man", and the more we've seen of him and his works, the more you realise just what a genius he was – way ahead of anything else being produced at the time north of the alps.

We first went up to admire the view above the roof tops from the city's imposing castle – built during the Middle Ages when Nuremburg was growing wealthy as one of the main crossroads of European trade. Just below the castle (close enough for Durer to regularly keep up with his patron the Holy Roman Emperor), was Durer's 4-storey house – as this was one of the few buildings to survive the Second World War intact, our visit here also gave us an insight into daily life in the Middle Ages.

Having got a better idea of Durer's life, his inspirations and his techniques, it was time to see some of his works at the city's excellent art museum. It must have been the good weather outside, but we were virtually the only visitors admiring a great collection of Durers, Cranachs and other German artists (most of whom I hadn't heard of before, but still enjoyed).

Unfortunately, because of our 6-week break from sightseeing, we seem to have lost some of our "tourist stamina", which meant that we had to stop a couple of times for a drink, but luckily Nuremburg is a great place to do just that. One day wasn't enough to see all that Nuremburg had to offer – we'll have to come back some time soon.