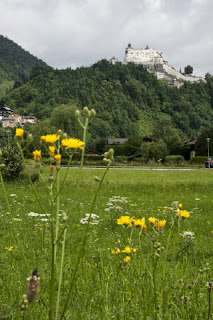 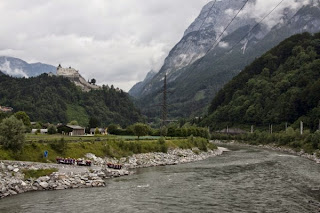 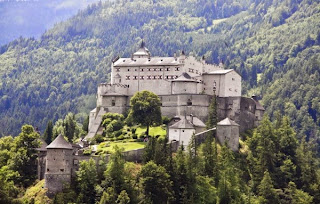 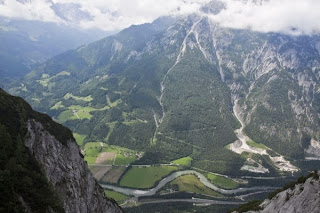 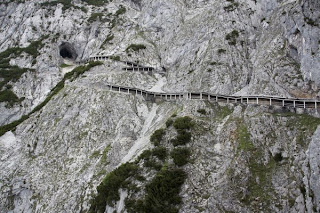 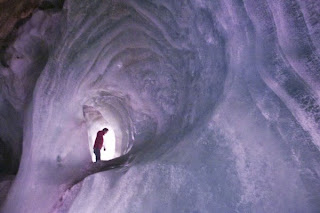 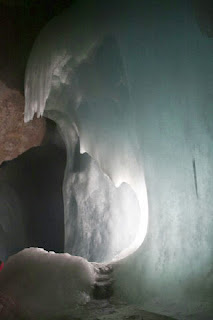 I've never been to an ice cave before, in fact I'd never even heard of one before. But seeing as we were breaking up the journey to Slovenia by stopping off in Werfen, Austria (just south of Salzburg), which just happens to be home to the world's largest accessible ice caves, it was time to get acquainted.

Werfen's already over 500 metres above sea level up in the Austrian mountains, but these caves are hidden deep in the mountain, over 1,600 metres up, so the trip to see them involves a steeply winding bus ride, a steep walk to the cable car, an almost vertical cable car ride, and then another very steep walk to the cave entrance – the only good things are that you get some great views down to Werfen with its spectacular castle, and that all that climbing gets you pretty warm before you enter the freezing cave.

Because, as we've packed for a warm summer in Southern Europe, rather than for exploring a sub-zero mountain cave, I was wearing pretty much everything I had with me, like I was wearing a fat suit –a T-shirt, a long sleeve T-shirt, another T-shirt, a shirt, a jumper and a pac-a-mac, but still the icy chill from the cave entrance took my breath away. However, the sights inside were even more breathtaking – it was amazing to think that it was warm and sunny down at the campsite at the bottom of the green valley below, yet up here inside these cavernous ice-boxes it was a deep-chilled winter wonderland and the ice in here is up to 25-metres thick in places.

These huge limestone caves get super-cold over the winter, and then over the summer the melting snow from the mountain-top drips through a few small openings, gets frozen again, and forms giant rivers of ice and bizarre-looking natural ice sculptures that need to be seen to be believed. The atmosphere builds as we were given a steaming gas lamp to light our way, and we began to climb the 700 steps up through this huge cathedral of ice – the breath of 40 people panting away up the steps being lit up atmospherically by the bright magnesium flares of our guide.

There was such an other-worldly atmosphere in these eerie caves that it felt like the set from a science-fiction film – like those scenes from Logan's Run, or from Alien. This was one of the weirdest environments I've been to – a great experience (if a little bit on the expensive side).

Having ticked off ice caves from our list of must-dos, hopefully, we're now going to leave the cold behind us, and find some sun south of the Alps in Slovenia.