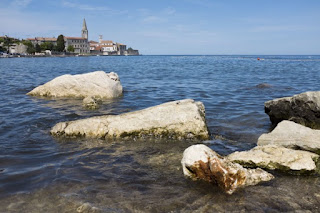 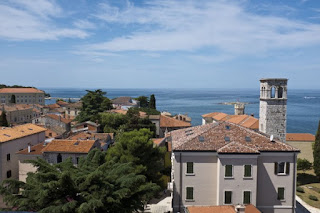 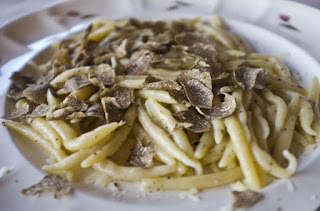 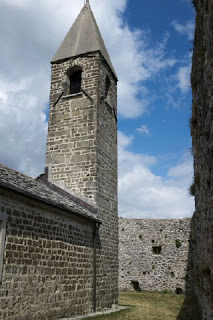 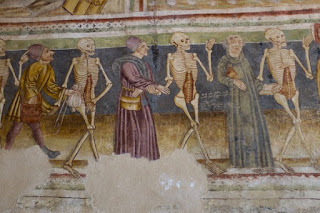 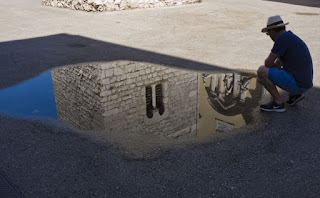 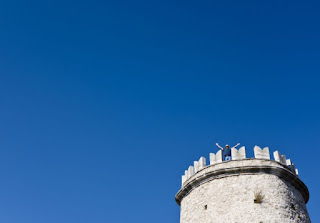 The great thing about where we are in Slovenia, is that it's so close to other countries to explore – Italy is 10 kms away, while Croatia is about 15 kms away. So, this weekend we hired a car and did a bit of exploring.

On Friday night we visited Slovenia's most famous coastal town, the beautiful town of Piran – a perfectly-preserved Venetian gem that has the historic feel of one of the islands in the Venetian lagoon. For obvious reasons, the atmosphere was much more touristy, international and upmarket than more-workaday Izola, but it made a nice contrast.

The next day, we headed down to Porec on the Croatian Istrian coast – unfortunately, as we approached the queue of traffic at the border crossing, we hadn't realised that Croatia, while part of the EU, was not party to the Shengen Agreement. So, having neglected to bring our passports, we were turned away at the border – whoops! Anyway, Izola was only a 25-minute drive away, so we got the passports and tried again.

If you read the Lonely Planet guide to Croatia, you'd probably avoid Porec – according to LP, it's over-developed and over-touristy, and whilst they have a bit of a point, it's actually another beautiful Venetian port, with lots of historic architecture and a wonderful seaside setting. The highlight was a wonderful 6th century Byzantine Basilica, with glittering mosaics to rival Ravenna or Constantinople even.

To escape the tourists, we headed inland, which felt like another country – much quieter and much less developed. We happened upon a hilltop restaurant specialising in truffles (the local speciality), that promised "food for hedonists". I'm not sure I'd describe us as hedonists, but the food was fantastic – not cheap, but we consoled ourselves that it probably would have cost three-times that amount back in London.

Our final stop was the inland town of Pazin, home to a famous castle, some caves and a gorge – unfortunately, the whole town was asleep, the caves were shut, and the castle just ok. Having said that, the gorge was gorgeous, and it was good to see a bit of inland Istria.

Sunday, we headed towards the other side of Croatian Istria, to see some of its trademark stunning coastline. On the way, we stopped off at the tiny Slovenian village of Hrastovlje, home to a remarkable fortified Romanesque Church, featuring some fantastic frescoes – the highlight being a bizarre "Dance of the Dead", with some gleeful looking skeletons leading various figures to their graves.

Then, passports in hand, we crossed the border and visited the famous "Opatija Riviera" – to be honest, we'd never heard of it before, but once we got to this fabulous stretch of coastline, we could see why it was famous – unbelievably picturesque. We headed to the little village of Velosko, and fell in love with it immediately. It was touristy, but not too busy; a good choice of restaurants; plus an amazing coastline of crystal-clear water in all shades of blues. Fantastic.

From the sublime, we headed just a few kilometres along the coast to the slightly run-down port city of Rijeka, Croatia's third-largest city. Trying not to be put off by the lines of ugly tall apartment blocks from the Communist era, nor the crumbling dock facilities, we found that the centre of the city was actually quite picturesque (although virtually dead on a Sunday afternoon – I presume that everyone had sensibly headed off to enjoy the Opatija Riviera). The highlight was the Trsat Castle, high up on a hill overlooking the sprawling town below – fabulous views.

Before returning the car on Monday, we headed inland to visit Nova Gorica on the Italian border. There's not much remarkable about the town, other than the fact that it was built entirely from scratch after the war, when the borders between Italy and then-Yugoslavia were re-drawn, and a town of Slovenes were displaced from Gorizia which was designated as Italian. Supposedly, the new town was designed along the lines of Le Corbusier, but to me its pre-dominant use of concrete was pretty similar to places in the UK like Woking or Braknell (not what you'd describe as architectural gems), although it did have a good sense of space and some nice tree-lined roads.

But, for us, the interest was walking across the now-unpatrolled, unmanned border into Italy, crossing what was once the frontier between "the free world" and the Communist bloc. As we pulled back the iron curtain, suddenly the architecture was attractive again, the streets full of character. It was interesting to think about how things would have been 25 years ago, before Nova Gorica's version of the Berlin Wall was pulled down - the difference would have been even more marked.

So, in one weekend, we've seen some of the best of Croatia, had an insight into Slovenia's mix of influences, and got a glimpse into why we love Italy so much. Great fun!