When you've sailed for almost 1,000 miles upriver into the heart of the rainforest, you don't really expect to find a huge city of 2 million people waiting for you – but, that's what we got with Manaus today.

What makes this metropolis all the more remarkable, is that it's not really connected to the rest of the country by road (ok - there is one road leading out of the city, but that heads north to Venezuela). That means that pretty much everything we'll see here, has been shipped upriver. To see the huge container port and the waiting ocean-going ships anchored in the river (a full 1,000 miles from the ocean) was quite staggering.

Actually, Manaus doesn't sit on the Amazon, it sits on the wide Rio Negro, a few miles upstream from where the mighty Negro and the Rio Solimoes join together to form the Amazon. So, to get the best perspective on this, it was time to take to the waters again, to see the famous Meeting of the Waters.

First we took a fascinating boat trip around the backwaters of the Janauari Ecological Park. It was a roasting hot day, and there wasn't a lot of shade for those sitting at the front of our canoe (me!), but the sights were great. We saw plenty of birdlife along the verdant banks, lots of other river traffic, communities of people living on houseboats plonked on top of some absolutely huge logs, and a few giant water lilies (to be honest, these were looking a bit moth-eaten because they only thrive in the wet season). It was amazing to feel so far away from it all and so back to nature, when we were only a short boat ride away from the big city across the waters.

Next, we headed downstream to the point where the dark black waters of the Rio Negro, come together with the muddy brown waters of the Solimoes. These two sets of waters have such different properties (colour, density, speed, temperature, acidity and sediments), that they refuse to mix for about 4 miles as they flow alongside each other. This was more marked and more spectacular that the Meeting of the Waters that we'd seen in Santarem, and we also saw a few fleeting glimpses of the famous pink dolphin that's unique to the Amazon.

That evening, we decided to go out for a meal, heading to the main square, the Praca Sao Sebastiao, in front of the iconic Teatro Amazonas, Manaus's Opera House. The square was looking good, because they were putting the Christmas Tree up (although it doesn't feel like Christmas when it's 30 degrees C at night time), and there was a band putting on a free show for a lively audience. We rehydrated with a couple of beers, and then had some typical Amazonian fare – some pirarucu rolled in banana leaves (the gigantic pirarucu fish grows up to 8 feet long, so we weren't eating much of one), and some tambaqui, a rather earthy-tasting fish from the river. The meal was good, the atmosphere vibrant, and everyone we met was incredibly friendly.

We've had a pretty special first day here – hope the next 2 days in Manaus are as good! 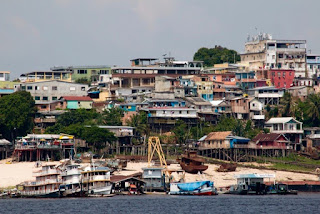 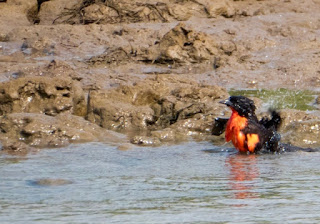 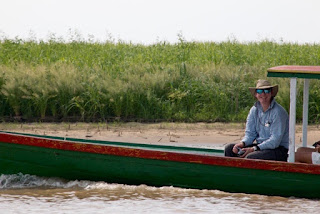 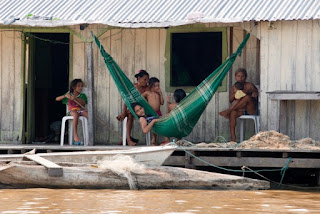 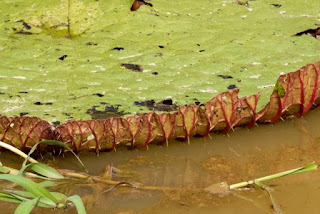 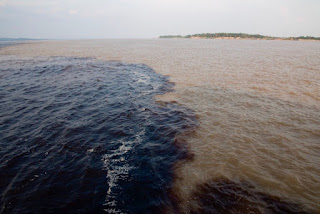 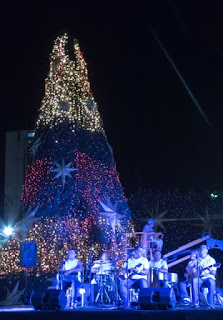