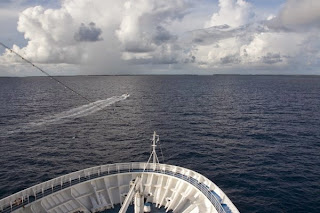 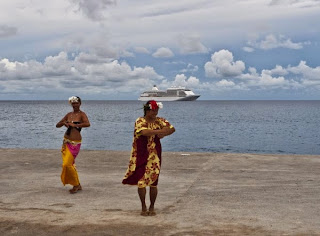 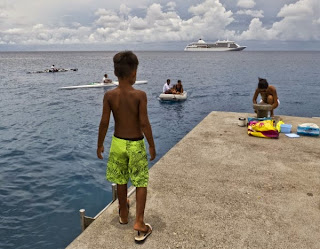 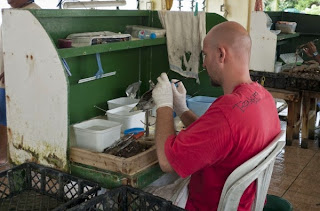 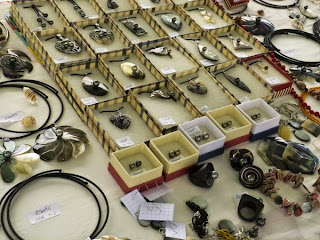 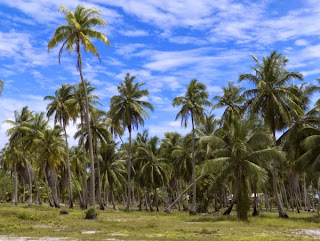 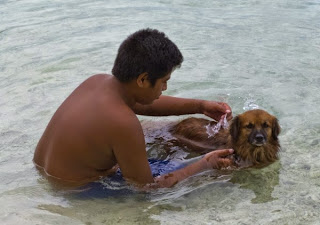 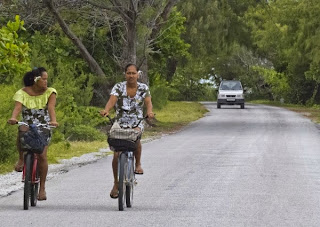 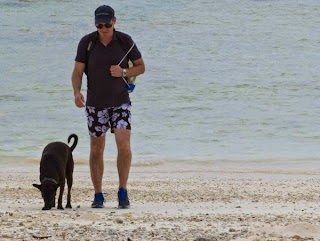 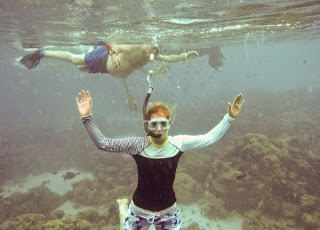 From the sea, the atoll of Rangiroa just looks like a thin typical desert island covered in coconut trees; but, once you sail in through a break in the coral reef that surrounds the atoll, you've entered into one of the biggest lagoons in the world, containing an incredibly diverse underwater world.

On land, there really isn't much to Rangiroa – home to about 3,000 people scattered around its ring of little islands, with only a couple of very small, untouristy towns. But, people don't come here to experience Rangiroa's land-based attractions (such as they are), they come to see the sea life that inhabits that enormous lagoon.

While Tracy went snorkelling in this "natural aquarium", going face-to-face with huge amounts of colourful fish, sting rays, and even the odd shark; I went on a lower octane tour to see what's become one of Rangiroa's chief source of incomes – its black pearl farms. Here we learnt how man has a stronger hand in the cultivation of pearls than Mother Nature. Because, for pearls to develop naturally in the oysters, it's actually a fairly rare occurrence, so the pearl is given a much-needed helping hand by the pearl farmers.

We saw how a donor round ball (of mussel shell) is carefully inserted into the oyster, which will hopefully accept it and then cover it with layers of black pearl to produce what's sold in the shops for hundreds of Euros. Now, before you start to think that these are mass-produced beads, you need to consider how labour-intensive a process it is to graft the donor ball into the oyster in the first place, how long it takes to grow the pearl (18-24 months typically), the unique conditions that Rangiroa's pristine lagoon provides, and the fact that they can't control the colour, size or shape of the pearl that will eventually be produced.

All these factors combine to justify the high costs of the pearls on sale in the farm's shop – I saw prices ranging from about €60 Euro for a small, imperfect pearl, to over €2,000 for one of the big specimens – needless to say, even the cheapest was too expensive for an old skinflint like me.

After the tour, I met up with Tracy and James to find a beach to do some snorkelling from. So, we wandered down the island's one road, and found a public beach to explore (successfully thumbing a lift from a kind local when the going got too hot). As ever, the waters were warm and clear, and there were plenty of fish to see down there.

Having watched the fish, it was now time to eat some, so we headed to a shack by the beach for some lunch. It looked fairly unpromisingly scruffy, but the food was great – we wolfed down some really excellent poisson cru. Then, as we worked off our lunch and wandered slowly back to catch the tender, we were befriended by a lovely dog who acted as our escort, protecting us from the numerous other stray dogs on the island.

Rangiroa is all about the lagoon – gorgeous pearls, colourful sea life, tasty fish – what a combination!