As we've approached the Amazon, the excitement levels around the ship have begun to rise. This enormously powerful river pushes freshwater a full 100 miles out into the Atlantic Ocean, so even though we hadn't reached the river proper yesterday, the colour of the sea was slowly changing from blue to brown as we approached the entrance of the river – the Amazon was coming to see us.

Actually, the entrance of the Amazon is a full 185 miles wide, so it's not necessarily obvious when we had actually reached the river, although the tell-tale smell of smoke could be smelt overnight – presumably from the cooking fires of the locals (hopefully not from them burning any more of the much-depleted forest.

This morning we anchored off the river port of Macapa, so that we could be cleared by the authorities. We didn't get off here, but immediately we started to have some wonderful Amazon experiences. It was so hot humid, that it took 15 minutes of acclimatisation for our cameras to clear of condensation. Over the course of the day, a collection of weird and wonderful bugs and insects started to head our way – pictured is a huge moth on the deck that at the time I thought was the size of a hand, although now that my heart rate has gone back to normal, it appears that it perhaps wasn't quite as big as my imagination was telling me.

But, the best experience was just to sit out on the veranda looking out across this vast brown river, scanning the verdant river banks, as we passed through the many islands of the delta – sometimes land was far away in the distance, sometimes relatively close up. The forest was dense, but wildlife viewing wasn't really possible because of the distance to shore, although a few times villagers would paddle out to wave at us from their canoes, while a few large birds would soar over the top of the canopy.

It's then that the sheer scale of the river becomes apparent – we're going 1,000 miles upriver (as far as Manaus), but we're only scratching the surface as it's over 4,000 miles long. Hoping for a great Amazon Adventure! 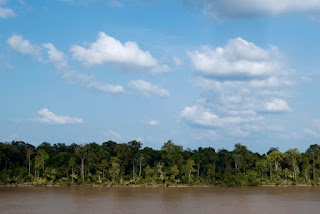 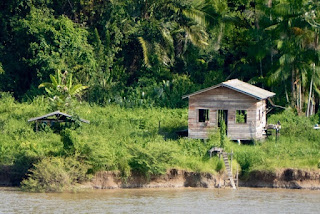 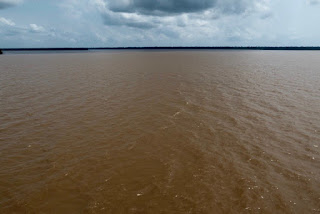 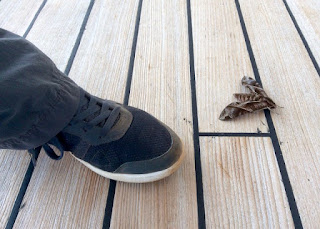