March 2nd and 3rd – The Many Faces of Durban

On the face of it – Durban has it all. It has a fabulous sun-kissed environment. It has gorgeous beaches. And it has a thriving economy – the huge port we were docking in was busy with exports of cars, sugar, and other locally grown and produced goods.
And yet the city isn’t quite achieving its potential. Its cosmopolitan make-up of races seem to be almost as separated as they were in the bad old days, as the city’s centre of gravity has shifted. As we drove to Victoria Market, the old colonial centre has almost been totally abandoned by the white population, who have moved to fancy new suburbs in North Durban.
The town centre isn’t as run-down as Port Elizabeth’s, but it was interesting to notice not a single white face out there on the busy streets. Victoria Market used to be the centre of the Indian District, but this whole area seems to have been abandoned by them too – sadly there were fewer of the spice stalls that used to make this market so interesting.
After the market, we visited the Botanical Gardens, where the Garden’s Curator took us on an interesting tour. As well as seeing plenty of exotic flora, there were some colourful birds and monkeys in there; and, it was nice to see that the Gardens were being used by all communities – Black, White and Indian.
On my second day, we were taken to a completely different view of Durban life – into the huge Umlazi Township, home to around 500,000 people, almost exclusively Zulu people. The township wasn’t your stereotypical set of shacks and poverty – instead it was really a flourishing self-contained suburb, complete with malls, neat houses, a university and hospitals (having said that, there were quite a few ramshackle shacks too).
Our tour took us to meet a Sangoma – a Traditional Healer or Shaman (what would have been called a “Witch Doctor” in less politically-correct times). She was a perfectly ordinary lady the same age as me, whose role was a cross between a counsellor, a herbalist, and a physic – kind of like we’d have had gypsy fortune tellers back in Europe a few years ago.
As she talked us through her beliefs and treatments, it would have been easy to be sceptical of her claims of communing with her ancestors and of magical healing treatments. But, when you boil down pretty much any worldwide religion, there are some pretty outlandish claims (walking on water, ascending into heaven, changing into animals etc etc) – it all goes down to what you believe. However, I did like the fact that apparently one major sign of her having healing skills was that she burped a lot.
It was a strange kind of tour – sitting in her house as she told us all about her life and how she had discovered and developed her mystical skills – I had so many questions, but I didn’t want to seem like I didn’t believe her stories.
Having had this insight into modern Zulu life, Tracy and I went for a stroll along Durban’s lovely Golden Mile, where the rough seas were a strong deterrent to any swimming, but where crowds of young African people strangely crammed together into small patches of water cheek by jowl, rather than spread along the wide stretch of sand.
My final point about Durban is that the cruising experience here had improved markedly – you used to be docked in the commercial docks, and the port gates opened out onto a distinctly dodgy no-man’s land. Now, a brand new Cruise Terminal has been built in the redeveloped Point District, which used to be a no-go crime-ridden area, but is now being equipped with lots of fancy apartments. Our guide told us that within a couple of years, this area would be as safe and vibrant as the V&A Waterfront in Cape Town. It would be quite an achievement – that’s the kind of Durban Regeneration I would like to see. 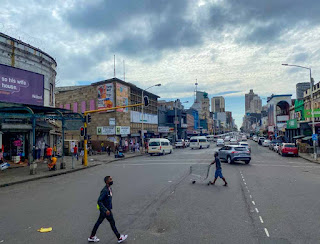 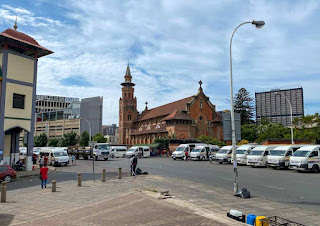 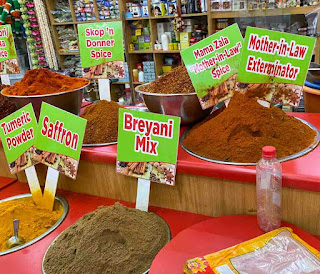 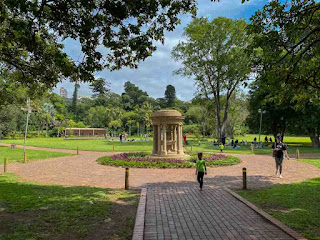 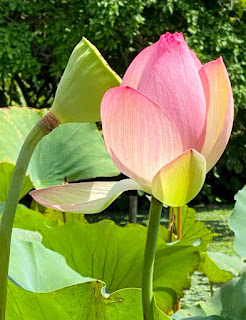 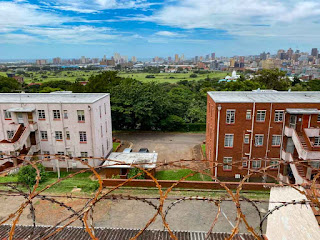 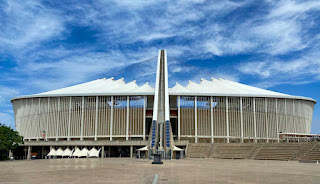 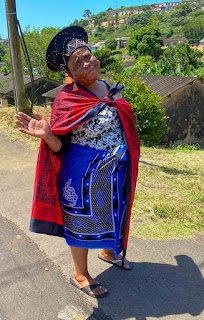 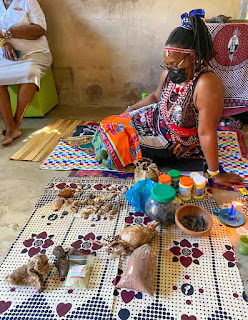 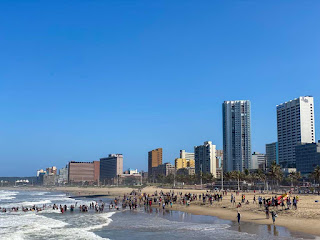 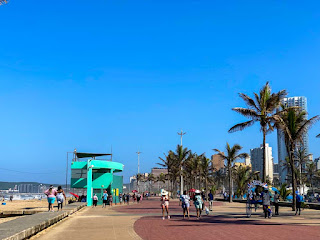 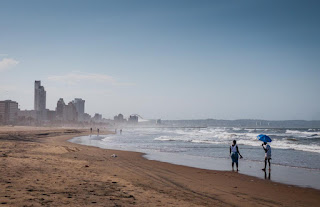