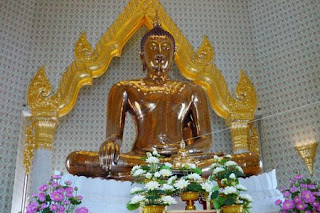 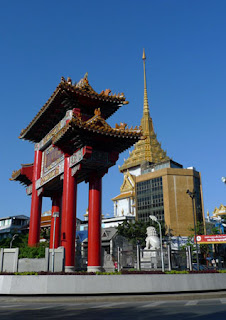 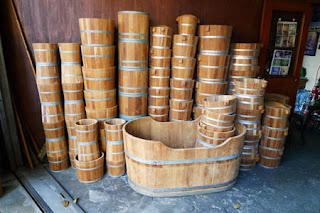 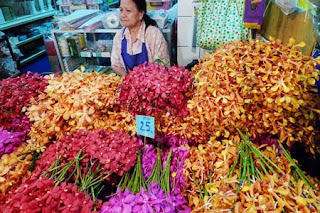 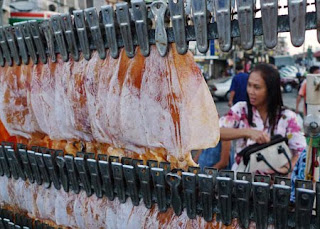 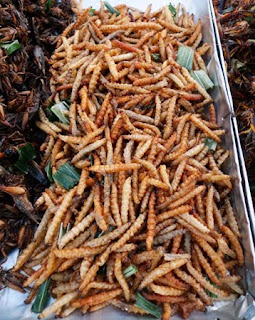 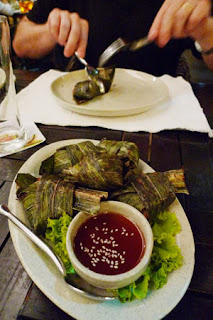 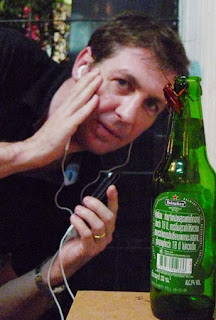 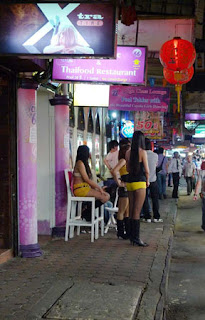 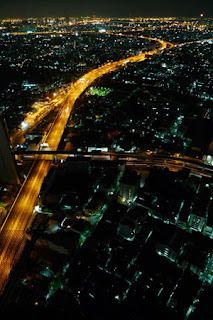 The ship got into Bangkok at 2pm, so we rushed off the ship as early as possible and got a taxi into town. As we've now seen all the "main sights", we're now into exploring some of the less famous attractions in Bangkok. We first went to see the Golden Buddha – an enormous solid gold statue of the Buddha from the 15th century, that weighs in at 5 tonnes. Up until the 1950s, the Buddha had been encased in a gilded clay surround, so they had no idea that it was solid gold underneath (they think it got covered when the temple came under attack in the 18th century). It was only when they tried to move the Buddha, and it fell over (because it was more heavy than they thought), that the clay cracked, revealing the solid golden Buddha image underneath.

That must have been quite a surprise for the monks, to realise that they'd been sitting around the religious artefact with the highest intrinsic value in the world (according to the Guinness Book of Records) – in 2003, the gold was valued at $33 Million.

The Buddha stands on the edge of Bangkok's Chinatown, so we went to the Museum of Chinese Culture, which was housed in the Golden Buddha complex. The Chinese have been coming to Thailand to settle for centuries now, in their hundreds of thousands every year, and so Chinese culture has become a significant part of Thai life. Right from the early days, the Chinese have dominated business and trade in Thailand, and they make up the richest section of Thai society. The Museum tried to paint a picture of integration and harmony between the two cultures, with everyone uniting behind the figure of the King, but it's difficult to assess the true relationship between the two communities.

We then went to see Chinese culture in action, by visiting Bangkok's large Chinatown – narrow alleyways lined with stalls selling some odd-smelling food, the usual mass-produced tat, as well as some interesting stuff as well. The teeming alleys were full of people (and a few cockroaches scuttling past), but this didn't seem to deter people on motorbikes barging us out of the way on a regular basis.

After this, we went on the hunt for a restaurant that we'd seen recommended on the internet – the road didn't appear on any map, and no-one had heard of it, so after much traipsing around, getting increasingly hot and bothered, we gave up, and went for an old favourite, The Mango Tree, on the edge of Patpong (the Red Light District). As we were searching, we found a street stall selling roasted cockroaches, grubs and insects, so we were happy to go for a more conservative satay and green curry combo in the restaurant The meal was delicious, and we ate far too much, and then we staggered out into the chaos of Patpong, where we received countless offers to sample the delights of Ping Pong shows, Banana shows, Balloon shows (we dread to think what they involved), and just your standard pole dancing. We peered into a couple of these bars, to see countless bored-looking skinny girls, their faces looking pinched from drugs, in skimpy bikinis, standing on their podiums going through the motions – I couldn't think of anything less sexy.

So, we dragged ourselves from the sleaze, and went to the open-air Sky Bar on the 65th Floor of the State Tower. Here, we were in another world, of trendily conspicuous consumption, feeling incredibly exposed on a platform overlooking a 65 floor straight drop down to ground level. Tracy started to feel a little unsafe, given that the ledge round the edge of the platform was only at chest height, so we enjoyed the views, and made our way gingerly to terra firma.