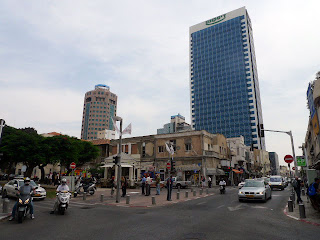 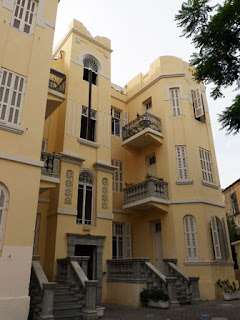 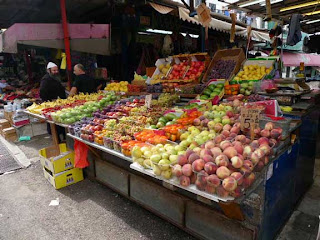 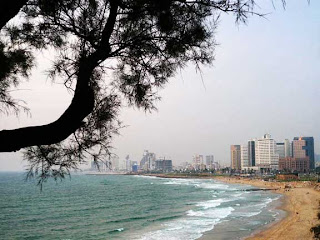 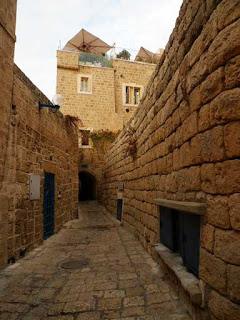 The biggest adventure of today was to negotiate the formidable Israeli Immigration Authorities. These people had definitely not been to charm school.....

We were docked in the industrial port of Ashdod which is nowhere near the town's train station, so if you're doing things on your own, you have to get a bus to the edge of the port, and then get a taxi to the station. Further complications to the journey are added by the fact that Israeli train timetables read from right to left, and the Hebrew script is indecipherable to Westerners. However, the train system is very modern and efficient, so we were whizzed in air-conditioned comfort to a hot and humid Tel Aviv in 45 minutes.

Getting the train, you feel like you could be in any European country, except that here in Israel, pretty much everyone is a reservist in the army, so there's loads of people in uniform walking around with machine guns slung disconcertingly over their shoulders.

In a country where most of the cities have thousands of years of history, TA is little more than 100 years old, and most of the city has been built pretty quickly, to accomodate the huge numbers of Jewish settlers arriving over the course of the 20th century. So, you see an array of 1920s bauhaus architecture, unnattractive 50s concrete blocks, and gleaming skyscrapers.

It's a very busy and bustling place in a beautiful location on the Med with clean white sandy beaches - put this city anywhere else in Europe and it would be a huge resort.

We met up with our friends who live in TA, so we had an insider's guide to the city. They took us to Jaffa (reputedly the oldest port in the world), where we had a lovely humous lunch in an Arab restaurant, and we explored the old town, which was full of brides in huge white dresses having their wedding photos done (apparantly Thursday is the day Israelis get married).

A lovely day of catching up, exploring and eating - the perfect combination.