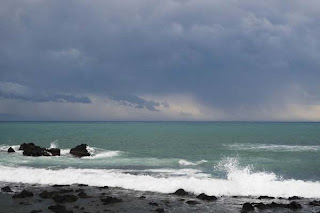 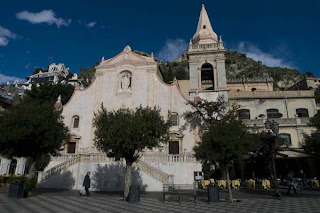 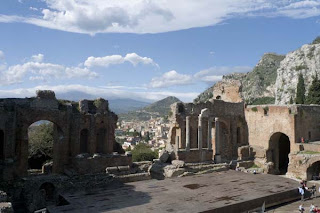 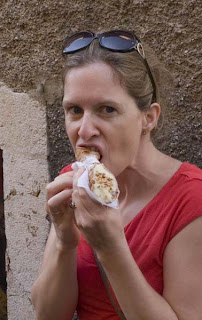 Another windy day today, which meant getting on and off the ship's tender was a fairly alarming process, as it lurched up and down by quite a few feet as you tried to get onto it. In fact, the weather had turned so bad, that the decision was made to move the ship from being at anchor off Taormina, to dock in Messina, about an hour up the road.

So we had a dash around Taormina's medieval streets to try to see as much as possible, before getting the bus back to Messina, for my afternoon lecture. We visited Taormina's spectacular Greco-Roman theatre, and marvelled at its fantastic setting, with the sparkling sea and a snow-covered Etna, smoking in the distance, as a backdrop to the stage.

Having ticked off, Taormina's Number One sight, we just went for random wandering through the atmospheric backstreets of the town – it's not difficult to see why this place is rated as the most beautiful town in Sicily. Just to keep energy levels up, Tracy troughed her way through a delicious cannoli, while I went for the healthy option – a slice of greasy pizza.

Having arrived in Messina, we were intending to explore the town a little, but the threateningly grey skies gave us the perfect excuse not to venture into the fairly non-descript town. At least Messina does have a good reason for looking so unprepossessing – in 1908, almost the entire town was destroyed in a massive earthquake that killed almost 100,000 people.