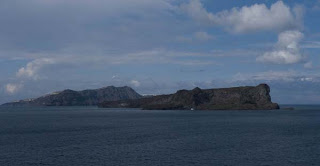 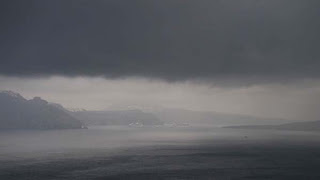 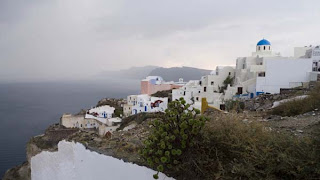 We weren't scheduled to arrive at Santorini till 2pm, so we had a chance to be on deck for one of the most spectacular sail-ins in the Europe, as we entered the huge crescent-shaped caldera that forms the island, passing by 200 meter high sheer cliffs, striped with different coloured volcanic rock.

As it had been warm and sunny all morning, we dressed appropriately in shorts and T-shirts, but literally as soon as we stepped foot on the tender, the wind got up, and ominous black clouds blew in. Our tour took us to the village Oia, one of the most beautiful villages in the Aegean, its white cubical houses clinging on to the edge of the cliff-face with fantastic views across the caldera. Unfortunately those views would have been more spectacular, if it hadn't started bucketing down, which forced us to find shelter, warmth and beer in a local taverna where the old man appeared to be speaking English, even though none of the sentences he said made any sense whatsoever – we understood the individual words but they didn't bear any relation to the ones that preceded or followed them. We foolishly nodded and smiled away politely like we understood what he was talking about, which only encouraged him to tell us more unintelligible nonsense.

We ran back through the rain to the coach, which then took us to a local winery for a tasting of Santorini's wine, where everyone tucked in heartily. As ever on these wine tasting tours, the level of conversation on the way back, was much louder than it had been on the way there.