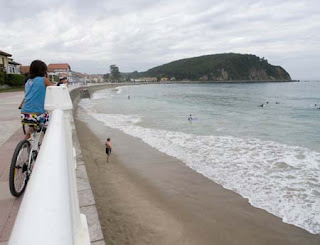 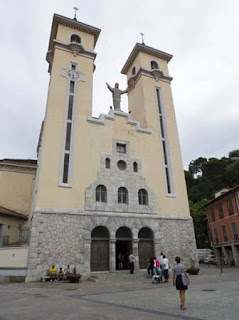 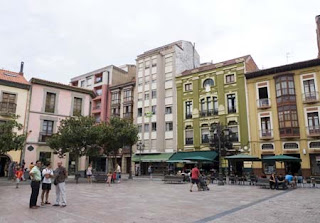 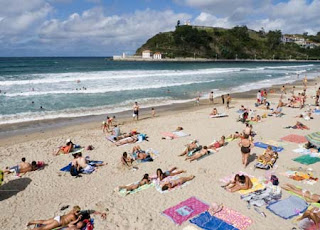 Having spent such a nice time in Comillas, we felt a little sad leaving Cantabria behind and moving on to Asturias. Ribadasella is another attractive beach resort and pretty little fishing village, that has the added advantage of being a surfer's paradise too. Our campsite was a little on the pikey side, but the walk into town along Ribadasella's lovely promenade watching the huge breakers roll in from the Atlantic and the surfers bobbing about, waiting patiently for the next gnarly wave to ride, more than made up for it.

There's not much to the town, apart from some pretty pedestrianised streets and rows of restaurants and bars. As Asturias is cider country, and every second building is a Sideria, we thought we'd better join with the locals and try out a bottle. Asturian cider has to be poured at arms length from the bottle into the glass from a great height to give it some froth – this method spills a large proportion of the cider onto the floor and gives the Asturian streets a permanently alcoholic aroma, like a squad of hard boozing winos has just staggered past. However, from the bottle that we tried, the more that went on the pavement the better – it was like paint stripper (maybe they pour it at arm's length because the smell's so bad). You could feel your stomach instantly rotting away, as soon as it passed your lips – we won't be trying it again!

On our final night in Ribadasella, we felt very old and boring as we cooked dinner and ate cards on the campsite, while the majority of our young fellow campers got dressed up for a big night out on the town. There was an open-air rock festival going on in town, with the sound system cranked up to eleven, so we fell asleep to the deafening sounds of Eurorock blaring across town, then to be woken up to the cider induced shouts and boozed-up laughter of our fellow campers as they staggered back to the site in the early hours.