The “Isla Grande” of Chiloé in Chile’s deep south is normally an island of almost perpetually dreary grey skies and 200 days of rain a year, so to wake up to crisp blue skies and bright sunshine was a very pleasant surprise. That meant that this island of rolling green fields and bucolic landscapes was looking at its very best, for another day of “panoramic” coach tours.

We came into its attractive capital, Castro, where we saw the island’s trademark “palafitos” – colourfully-painted stilt houses hanging precariously over the water’s edge. On an island of so many attractive rural vistas, these picturesque stilt houses made the town almost as photogenic as the countryside.

Chiloé is probably most famous for its collection of UNESCO recognised wooden churches, built in an architectural style that’s unique to the island; and, today we got to see four of them. We started off with the least typical church, in Castro, whose grand façade was painted in an eye-popping yellow and purple colour scheme that looked like it had been selected by a 5-year old.

Our next stop was to the much simpler Nercon Church, which followed the standard Chiloé template of wooden-shingled façade, topped by a three-tiered tower; before heading to the ramshackle village of Chonchi, where its distinctive painted church stood at the top of an impossibly steep hill that led down to the fishing harbour below. Our final church was the unadorned Villipuli Church, in an isolated location by the sea.

This is a beautiful island that’s always felt like a place on the edge of civilisation; but it appears that civilisation is edging closer towards it. More outsiders are being attracted to its simpler lifestyles and pristine environment; while, a new bridge is planned to connect it to the mainland in 2025. Our guide felt that overall this would be a good thing – he thought that the increased opportunities here would prevent its young people from moving away. Let’s hope that Chiloé can keep hold on to its unique culture. 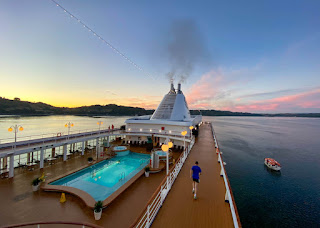 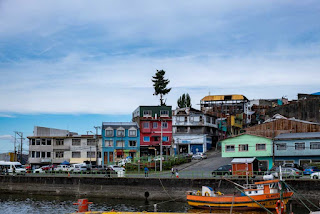 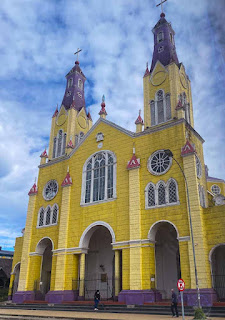 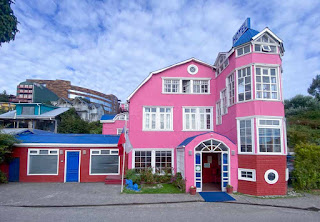 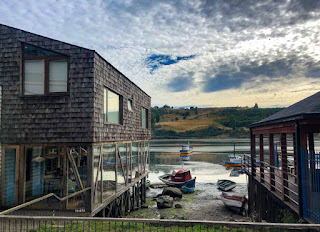 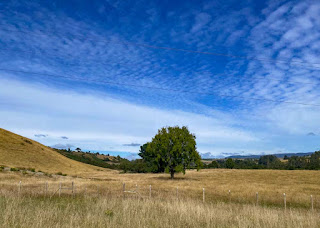 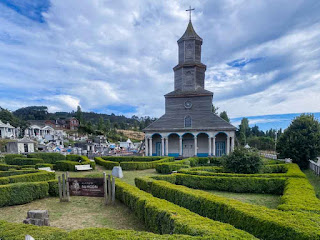 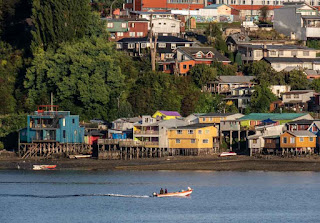