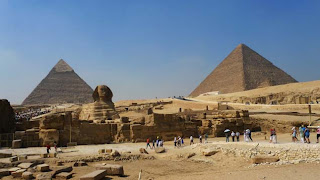 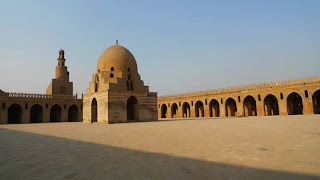 Another early start for the long journey from Alexandria to Cairo.

Parts of Alexandria always look like a bomb's just hit it, but today the rubbish on the streets looked even worse (the same was true of Cairo as well). I asked the guide what was happening, and she explained that Swine Flu was to blame. Swine Flu?

It appears that it's not only the West who's in the grip of Swine Flu hysteria. Apparently, as soon as news of the epidemic got out, Egypt decided to slaughter all the pigs in the country - all 2 million of them. This left the country with a severe waste disposal problem, because it seems that most of the country's rubbish was fed to the pigs, who promptly recycled it.

This extreme reaction must have been caused by loads of deaths, I asked. No - there's been 3 recorded deaths.

Anyway, we got to the Pyramids, which are still mind-blowingly awesome, in spite of the persistent hawkers, annoying camel men, and dodgy conmen who frequent the whole Giza plateau. Ignoring the constant shouts of, "H:ey! Where you from!", Jon ploughed through the crowds to find a quieter perspective on the Pyramids. You drop your guard for a second, and you're being led by your arm for a ride on a mangy moth-eaten camel. "You English? Lovely jubbly!", ad nauseam.

Next we went to the Sphinx, and for the first time in many visits, it wasn't covered in scaffolding, so it looked pretty magnificent, in spite of being around 5,000 years old. It looks on inscrutably as the ever-expanding city of Cairo (population approaching 20 million and rising) sprawls ever closer, and those icons of 21st century culture, a KFC and Pizza Hut stand opposite it.

We moved on to the Nile for a felucca trip and lunch. It was very tasty even though everyone looked very suspiciously at it, given that we were all warned about the quality of food in Egypt.

Next we braved the manic Cairo traffic and went to the Gayer-Anderson museum - a fascinating collection of traditional furniture and artefacts in a beautiful 18th century house, before visiting the exquisite Ibn Touloum mosque. This is one of the oldest mosques in Cairo, and is a welcome haven of peace in one of the most chaotic and noisy cities on the planet.

Everyone looked pretty exhausted, and we scarcely had the energy to explore the incredibly busy bazaar properly - this place is such a melée of people and noise, it was not the retail therapy people needed, but it was still a fascinating insight into Cairo streetlife.

Unsurprisingly, the noise of snoring on the journey back to Alexandria soon drowned out the hooting traffic.