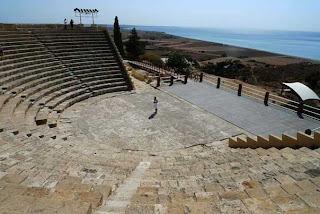 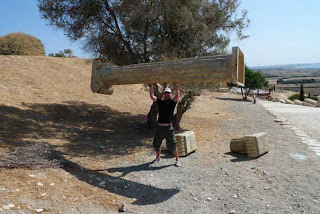 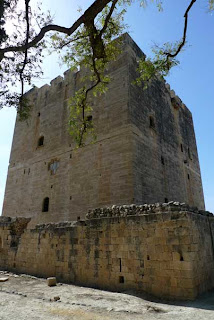 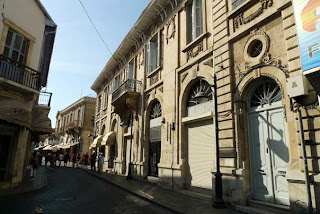 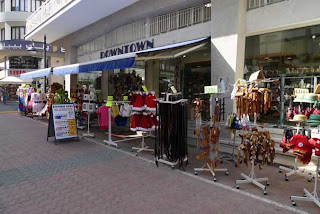 Today we took a tour from Limassol, Cyprus, to Kourion and Kolossi – it was absolutely boiling, so Tracy darted from shade to shadow, to avoid the burning sun.

Kourion is an ancient site, which boasts a large Roman mansion with lots of high quality mosaics, and a large Graeco-Roman theatre which seats 5,000, and has some amazing views across the coast and the sea, which forms its backdrop.

While we were exploring the site, I found an old Roman column, which, now that I've been going to the gym again, I was able to lift above my head with ease. OK – it was a stage prop, a plastic column that was left over from a performance, and even then, I struggled to get it off the ground.

Next we moved onto the Crusader castle at Kolossi – Cyprus was the place the Crusaders moved onto after being thrown out of Acre and the Holy Land. Only the central tower of the castle survives, but it's still an impressive reminder of those turbulent times.

After this, we had a bit of spare time in Limassol itself – a glamorous combination of mainly touristy shops (selling Santa hats already!) and traffic-clogged streets.