December 5th – Going Round the Bend in Khasab 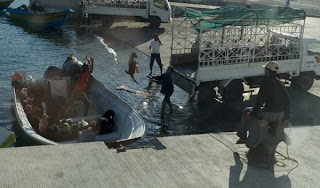 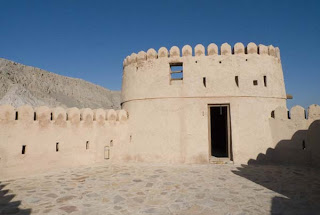 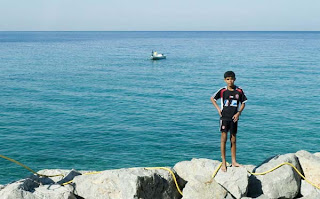 Peaceful little Khasab is a geographical anomaly. It sits at the end of the rocky Mussandam Peninsula – a small enclave of Oman overlooking the Straits of Hormuz, but the peninsula is separated from the rest of the country by the UAE. This gives the place a "world apart" feel, because it's pretty much unvisited by Western tourists – in fact the main foreign visitors are the crowds of Iranian smugglers in their speed boats who we shared the port with.

Every morning they zoom across the 70 miles from Iran, their boats full of goats to sell in Khasab's markets. The poor goats are literally thrown one-by-one from the boat over to a man on the shore, who attempts to catch the mass of flailing legs and fur being chucked at him, before loading them onto a truck. Over the course of the day, the Iranians then buy up contraband goods (particularly American cigarettes), but also TVs, fruit juices and cuddly toys (who knows why?), and they all set off in a high speed flotilla at about 5pm – our ship had to negotiate a path through the teeming mass of smugglers as we left the port.

During the day, we visited the impressive Khasab Fort, which was built by the Portuguese in the 17th century, and then we moved onto another historic fort – both are a sign of the strategic importance of this place. Even today, 15% of the world's oil passes through the Straits of Hormuz above Khasab.

There is one historic British connection with Khasab – in the 19th century, a telegraph relay station was set up on one of the sun-blasted islands off the coast, to provide a communications link with Imperial India. Back then, as one of the most isolated places in the world, this was just about the worst posting a soldier could possibly get, terrible boredom, loneliness and the extreme heat, which was enough to literally send them mad. As a result of the psychological
problems of the British soldiers here in Mussandam, the term 'going round the bend', entered the English language. What a fascinating fact!