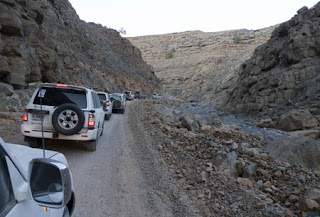 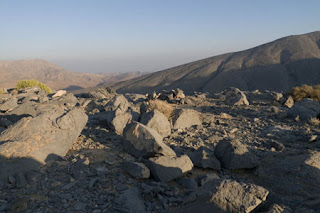 As one of the smallest and least known of the seven United Arab Emirates, Fujairah doesn't exactly have a wide range of tourist attractions. There's no oil here, so it doesn't have the finances to create the artificial attractions of Dubai or Abu Dhabi. In fact, most cruise passengers head straight out of the sleepy little city, either into the mountains that have cut Fujairah off from the rest of the world for most of its history, or to explore the impressive coral reefs off its largely undeveloped coastline.

I opted for the mountains, and joined the "Mountain Safari" tour, in a 4x4 up to the rocky Hajar Mountains. The borders in this part of the world are all over the place (the locals blame the British for not sorting things out properly), with the result that Fujairah's territory contains enclaves from Sharjah and Oman. We made our way to Dibba, a town which is divided in three between the three states, and we crossed the border into Oman's Mussandam Peninsula, to start our climb into the mountains. Just before the tarmac road finished, we let down our tyres and began our off-road experience.

My jeep was at the back of the convoy which was stirring up so much dust that it was almost a white-out for the driver as he attempted to avoid the biggest boulders on the rocky track. As we climbed, the scenery of sheer cliffs got steadily more spectacular and the jolting and bumping got steadily more violent. The drive became something of an endurance test for the driver and for the passengers as the relentless jolting began to wear us down, but at the top of the 3,000 feet high mountain, the views across the barren landscape below us were certainly pretty spectacular, as the setting sun and lengthening shadows turned everything golden.

A good experience, but I don't think I've got the stamina to repeat it again.