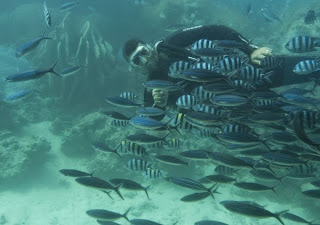 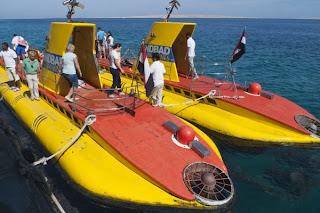 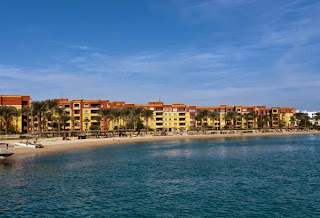 After the long coach rides to get to Cairo and Petra earlier in the week, a three-hour trip each way to see the Valley of the Kings from Safaga didn't appeal. So, instead I turned my back on culture and history, and went mass-market instead, taking the touristy Red Sea Submarine in Hurghada.

Compared to the scruffy town of Safaga, the Red Sea diving centre of Hurghada is a sophisticated tourist resort, but it still has that dusty, unfinished look of so many Egyptian towns. Our guide told us that the town used to be a preserve of the German holiday market, but they've mostly been put off by the ongoing political uncertainty here. However, Russian holidaymakers don't seem so put off by political troubles, and so they now make up 75% of the resorts customers – as can be seen by the omnipresent signs in Russian all around town.

Even with the influx of Russians, it appears that Hurghada is still suffering, and at least half of its hotel beds are unoccupied. This gave the whole town a bit of a sorry, end-of-season feel to it – with large numbers of half-built and abandoned hotels littering its dusty streets.

Overall, I'd say that the trip was perhaps more interesting for the experience of being in a sub, rather than for the quality of the sights down below. The reef we were visiting, was mostly grey, so it was difficult to see how healthy it was, while the fish we saw were mostly silvery, rather than the fantastical shapes and colours that you'd expect of these tropical seas. However, the company did their best to generate some interest amongst what sea life there was, as divers went past our viewing windows scattering fish food, generating fishy feeding frenzies right in front of us.

I guess that the lack of colour down there and the lack of tourists on the surface, both reflect the ongoing problems for the Egyptian tourist industry. The fragile underwater environment that attracts the fish (and the tourists) needs to be better cared for, while the fragile state of the political situation in Egypt needs plenty of care before the tourists will return in significant numbers.