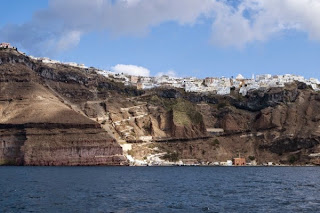 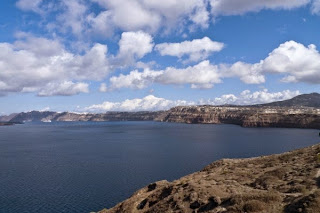 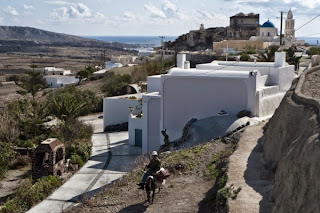 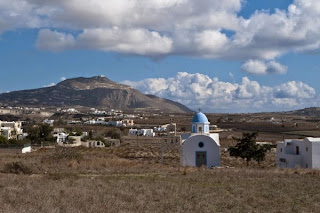 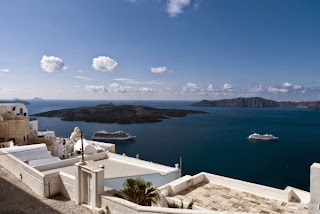 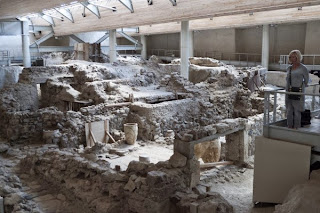 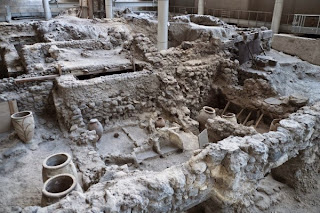 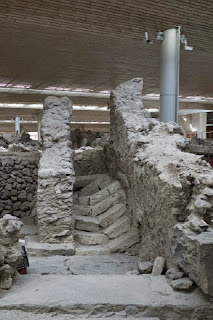 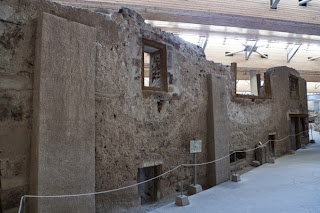 When you go to Santorini, you think of its gorgeous setting, of its stunning caldera, its white architecture and its black beaches. But, what most people don't tend to think of are its stunning archaeological ruins. However, today we saw some of the most interesting ancient ruins that I've seen in Europe – the 3,500 year old ruins of Akrotiri.

When Santorini's volcano blew in 1650 BC (the biggest explosion in recorded history), obviously there was no trace of the island's original inhabitants left – however, the remains of an ancient village were discovered in the 1960s, buried under deep layers of pumice stone, and what's been uncovered tells a remarkable story of a sophisticated civilisation out here in the Aegean.

I've been trying to visit Akrotiri for the last 10 years now, but every time I come here they've been shut – an accident at the site meant that it's needed a new roof for years now, and finally it's complete.

It was well worth the wait, because these ruins reveal a well-organised town of about 5,000 people living in multi-storey houses and enjoying an advanced sewage system. That might not sound very glamorous, but this was at the same time as most of the rest of Europe was living in caves or in rudimentary wooden huts.

The Greek government has clearly spent a lot of money on this, covering it all with a high-tech roof, and it's all very well done, so that you can walk around those ancient streets and get a good feel for the city they inhabited. What makes it even more amazing, is that they've only uncovered about 5% of the site, so that if more money becomes available there could be some amazing riches ready to be discovered.

Sadly, all the colourful frescoes that have been discovered here have either been taken away from the site or are undergoing restoration – so, we had to make do with the pictures that our excellent guide showed us of some amazingly skilful frescos that point to the population here living very sophisticated and harmonious lifestyles. The other thing that strikes you about the art is that there are no depictions of weapons or fighting – motifs which are recurrent throughout Greek or Roman art.

The whole site was way bigger and far more interesting than I'd been expecting – what a nice surprise. Santorini now has another wonderful attraction to add to its headline-grabbing sun, sea, sand and scenery.