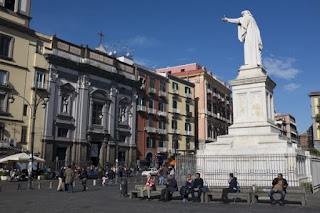 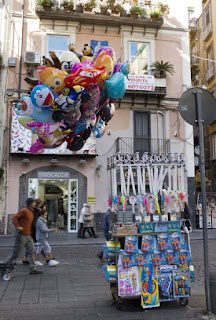 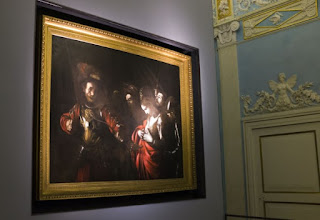 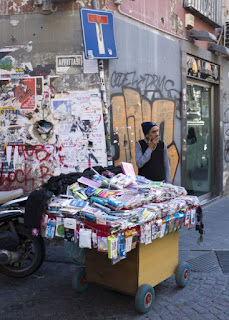 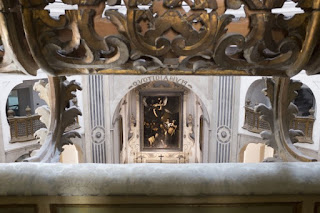 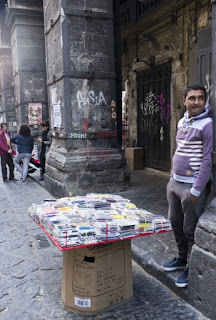 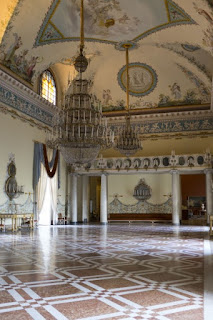 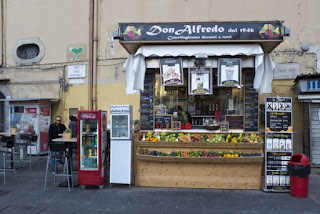 Strong winds prevented us from anchoring in Sorrento, so instead we headed to the nearby port of Naples, giving us the chance to explore this crazy, chaotic city once more. Our (rather disappointing) encounter with a Caravaggio in Siracusa, proved to be our inspiration today, as we attempted to tick off the three Caravaggios that Naples can boast.

I get the feeling that Caravaggio would have felt quite at home in Naples – like him, the city is inspirational, crazy, dysfunctional, brooding, full of life and occasionally dangerous. When he was at the height of his powers, in 1606 (aged 35) he ended up killing a man in Rome in a brawl, and he fled south to Naples with a price on his head. He picked up a couple of commissions here, before heading for Malta to live under the protection of the Knights of St John (where he painted the two masterpieces on display in Valletta's Co-Cathedral).

But, Caravaggio couldn't stay out trouble for long, he got involved in yet another fight, and had to escape from prison to Sicily to paint the painting we saw in Siracusa a couple of days earlier, and the two masterpieces on display in Messina that we saw two years ago. By now, Caravaggio's restlessness and isolation were coming through in his artistic style, and he quickly moved on, back to Naples again. Here, it appears that he was attacked and badly wounded, before he decided to return to Rome to get forgiveness. Sadly, he never made it, dying on the road to Rome, of a fever (or possibly syphilis, or lead poisoning which could be an explanation for his volatile behaviour). So, possibly the greatest artist of all time, died sad and lonely at the age of just 38.

The first picture we saw, was his last ever painting, "The Martyrdom of St Ursula", undertaken on his final return to Naples after he'd been attacked and his sight possibly damaged. The painting was on display in the Palazzo Zevallos Stigliano, and is one of his more dramatic paintings – capturing the exact moment that the shocked St Ursula is hit by an arrow, coming to the realisation that she was just about to die. In the background is a poignant image of Caravaggio himself, with an anguished look on his face – you feel like he knew that his tempestuous life is soon coming to an end.

We then moved on through the frenetic Neapolitan streets to see our second painting, "The Seven Works of Mercy", on display in the church it was commissioned for – the Pio Monte della Miscordia. This was painted on his first visit to Naples, while he was looking to make some cash and contacts to put an end to his exile. While his genius and artistic skill is evident, to me, it seemed one of his least coherent works – a real jumble of figures and allegories. It felt like a reflection of his scrambled mind at the time, desperately juggling ideas and concepts in an attempt to get some mercy.

By now, we were on a Caravaggio roll, so we hopped onto the most crowded bus I've ever been on, and travelled up to the Gallery at Capodimonte, one of Italy's premier art galleries, to see our third and final work. At this point, we had a good news-bad news situation. This being the first Sunday of the month, it was free to get in – good news. But, only a part of the display was open, and not the part that included Caravaggio – very bad news!

We set aside our disappointment to whizz through an amazing collection of Raphaels and Titians (plus lots of other masters) – if this was just a small proportion of what was on offer, it would take days to take it all in. There's an old saying, "See Naples and Die", which isn't a reflection of its reputation for crime, but more that once you've seen everything that Naples has to offer, there's nothing left to live for.

Well, with one more Caravaggio still to see, we've haven't seen everything yet, so we'll have to come back before we die – but, as that other artistic genius Meatloaf said, two out of three ain't bad!