When we sailed into Muscat’s attractive harbour, with the Sultan’s huge yacht (the size of a small cruise ship) manoeuvring next to us, it seemed like a great day to go for a boat ride – clear skies, warm breezes and what looked like smooth seas.

I should have guessed that trouble lay ahead when they offered us seasickness pills before we got on the boat. We all laughed – don’t they know we’ve been on a ship for the last 3 and a half months, the odd little wave won’t trouble us!

Wrong. We then embarked on an incredibly bumpy ride on a small speedboat through what were probably 2-metre high waves, getting smashed around like we were on an out-of-control rollercoaster, while getting regular soakings from the waves. The purpose of our boat ride was to try to see some dolphins, but the dolphins had clearly been better briefed on the sea conditions than we’d been, so they stayed below the surface.

After an hour of fruitless dolphin hunting, I finally persuaded the boat driver to end the torture and take us to the coast for some snorkelling. Fortunately, we found a sheltered cove and dived in. The water was “refreshing” but not too cold to stop us having about an hour’s snorkel over the coral. I don’t know if it was the sea conditions that day or if it’s always like that, but there was a lot of sediment in the water so visibility wasn’t the best, however there was plentiful sealife down there – a couple of people even spotted a turtle emerging out of the murk.

Then it was time to get on the rollercoaster again, as we bounced our way past the spectacularly stark coastline, passing plenty of luxury hotels along the way.

At the end of our trip, I was feeling a little queasy, but I’d arranged to meet up for lunch with some friends in town. We ate at a nice Omani restaurant called Bait Al Lubain, which isn’t too far from the port gates (opposite the fish market), however the morning’s stomach-churning activities had meant that my appetite had left me somewhat. We had expected (I’m not sure why) that the food would be similar to Lebanese food, but there wasn’t a hummus, falafel or moutabal in sight, and the food seemed to have more of an influence from India than the Levant. Nevertheless, the food was tasty and the company was good.

Today was a reminder that sometimes, when you take to the water, it’s better to do it on a large luxury cruise ship with stabilisers than on a small, bumpy speedboat. 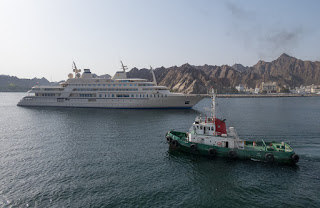 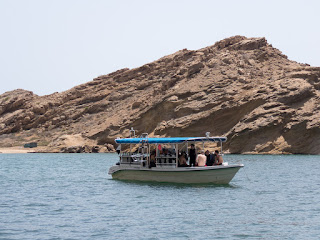 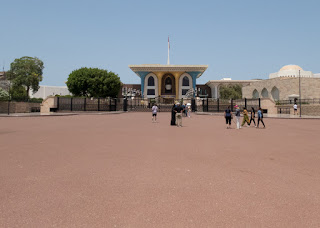 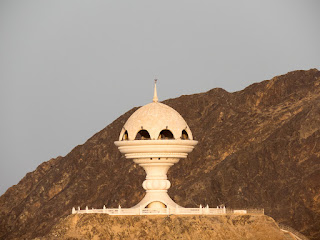 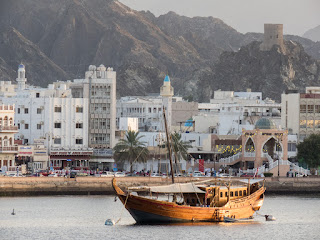