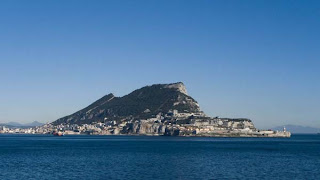 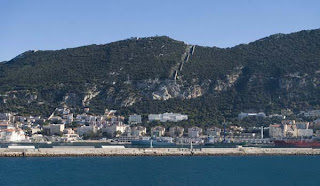 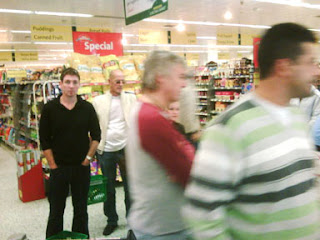 Today we returned to the United Kingdom, or at least a semblance of Britain, in its Crown Colony, Gibraltar – you could tell that this wasn't real Britain, because there wasn't a cloud in the sky and the sun was hot. As we were arriving at 1pm, I was on deck from 12, giving a commentary over the tannoy, as we passed through the pillars of Hercules from the Mediterranean into the Atlantic. It's not often that you can be on deck and see two continents, three countries (Gib (UK), Spain and Morocco in the distance), and two major bodies of water.

We've been to Gibraltar many times before, and as Tracy's monkey-phobia now prevents us from going up the rock, we limited ourselves to sampling a typical slice of British culture – going to Morrisons supermarket. As we entered the supermarket, we could have easily been back in Blighty – mothers shouting at their badly behaved children, overcrowded aisles stocked with all our old favourites, and Christmas songs playing on the PA. There was a limit to how long we could soak up all this British culture, so we stocked up on quality British staples like wine gums and chocolate, and made our escape.