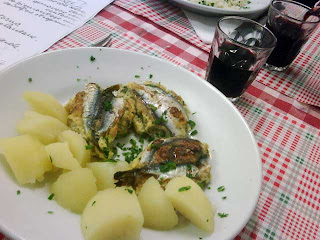 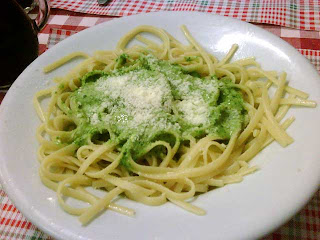 It had been a pretty rough night at sea, with the ship creaking and lurching all night, so it wasn't too much of a shock to get the announcement first thing in the morning, that we wouldn't be able to anchor at Portofino as planned. With 40 mph winds, the tender operation would have been far too dangerous. So, instead, the ship made its way to nearby Genoa instead.

Actually, Tracy and I were intending on getting the bus and train to Genoa anyway, so we weren't too disappointed to be avoiding the fun and games of Italian public transport. The main point of our trip was to go to a wonderful restaurant that we'd found last time we were in Genoa – a real backstreet place with a handwritten menu, and benches where you sit to eat with the locals.

It was a good thing that our plans for the day weren't much more ambitious than this, because the weather was atrocious, and it bucketed down non-stop, which meant that it wasn't really the right conditions for exploring Christopher Columbus's home town.

So, we made it through the puddles to the restaurant, and settled in for the afternoon – Tracy had stuffed anchovies (she's decided that this would be her choice for her final ever meal), while I had a risotto, followed by a lovely pasta and pesto Genovese, the town's delicious trademark dish. All this, plus half a litre of wine for 14 Euros!

After lunch, the plan had been to go to Genoa's Cathedral to see the Holy Grail, but a combination of the appalling weather, the apathy that half a litre of wine at lunchtime can bring, and the fact that we've already seen the "other" rival Holy Grail in Valencia's cathedral, meant that this plan was put on hold, and we fled back to the shelter of the ship.