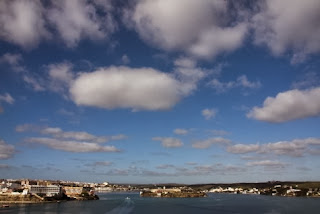 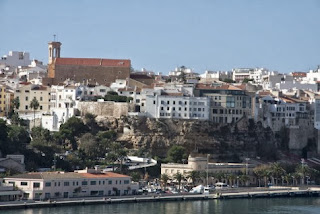 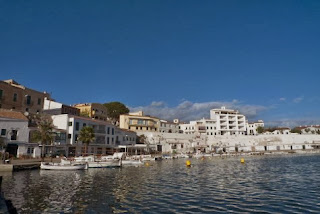 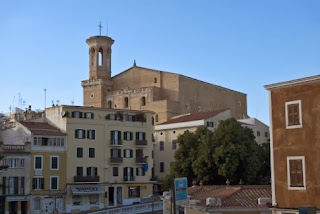 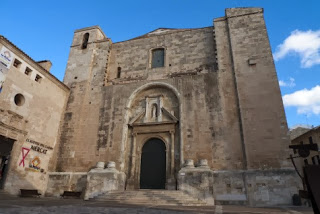 Sailing into Menorca's capital, Mahon's spectacular harbour is one of the great approaches to any port in the Mediterranean, so I was up on the bridge to narrate what we were passing on our way in. This is probably the most protected harbour in the whole of the Mediterranean, as we pass through a narrow approach, and then sail for almost 4 miles down the length of the harbour to Mahon at its end.

This incredibly sheltered harbour (it feels like a lake rather than the sea), plus Menorca's strategic position on the Mediterranean trading routes, has made the harbour a heavily contested possession over the centuries, so I was pointing out the heavily fortified defences put in place by the Spanish and the British over the centuries, and the mansions of the British Admirals (including Admiral Lord Nelson) who lived on the harbour in the days when Britannia Ruled These Waves.

In fact, Britain ruled Menorca from 1708 until 1802, so there was plenty of British heritage to discover in Mahon, and in the neighbouring town of Es Castel, which was called Georgetown in the 18th century, when it was founded by the British. So, we walked along the coast to Es Castel, to sample its quiet atmosphere, and see what relics of British rule we could find from the days when this was a garrison town. There were a few surviving Georgian buildings with their trademark sash windows along the grid pattern of streets laid out by the British military, plus you could clearly see that the town square was once the parade ground for the army.

But, perhaps the best feature of Es Castel is its atmospheric fisherman's port, the Cales Fons, which is a great place to station yourself for a drink in one of its seafront bars, and just savour those views across the magnificent harbour with all its historic fortifications. Being in this "British" town, makes you wonder what this place would be like if history had been different and Menorca had stayed British – after all, Gibraltar was granted to the British in the same Treaty as Menorca, and that's still British.

After a lovely relaxing drink, we trekked back to Mahon, to sample its somnolent, end of season atmosphere – very quiet indeed, but at least a reminder that this is still one of the least spoilt of all the Mediterranean holiday islands.