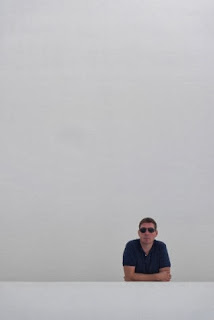 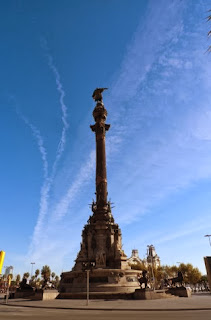 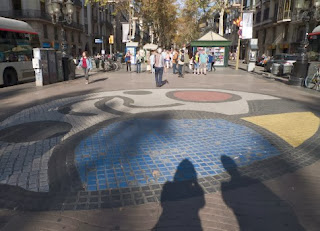 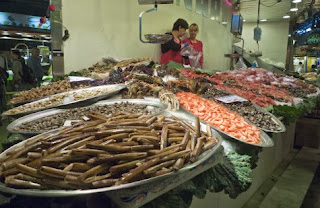 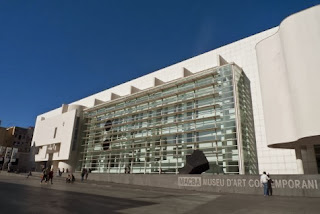 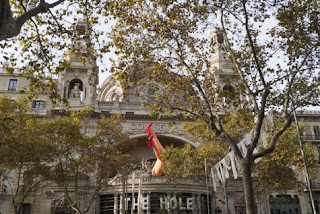 The good weather continued for our last day of the cruise in Barcelona.

Of course, all visits to Barcelona have to include a stroll along the legendary Ramblas (Barcelona's most popular, most touristy and most atmospheric walkway), so we thought that we'd get it out of the way at the start of the day, as we walked up from the port. On the way we popped into the city's colourful main market, La Boqueria, which was its usual riot of colours, sights and sounds.

Our destination today was to an art gallery that we hadn't been to before, MACBA – Barcelona's contemporary art gallery. Suitably enough, it was housed in a large white minimalist modern building, that let its weird and wonderful art do the talking. A couple of times as you walk round, you see a mop and a bucket or a bag on the floor, and you're not sure if they've been left there by the cleaner or whether they're a brilliant piece of social commentary.

As ever with contemporary art, I think I understood about 10% of it at most, but it confirmed how much Barcelona is a city that likes to think differently, and where art and architecture are a hugely important part of the local (Catalan) psyche.

From here, we just did some casual wondering through Barcelona's atmospheric streets – passing striking modern architecture, past fantastic modernist buildings of the 19th century, along narrow Gothic streets of stately late-medieval mansions, and along the sparkling waterfront. It's always been Barcelona's unique combination of styles and attractions that's been its biggest draw.

We'd walked our socks off, but in the evening we just about had enough strength to make it to the Born District to visit the lively El Xampanyet bar, for a glass or two of cheap cava and some tasty tapas. A great way to end a lovely cruise on the Silver Spirit.