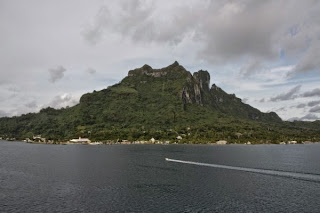 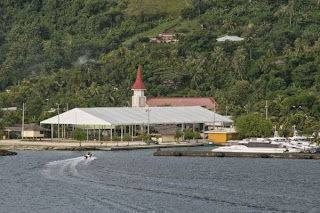 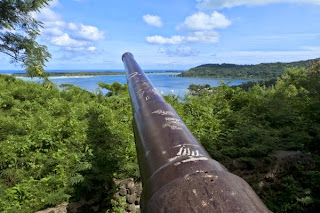 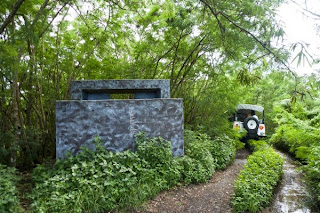 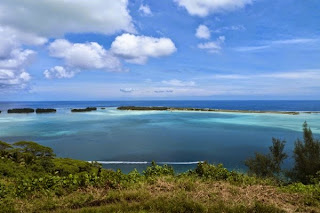 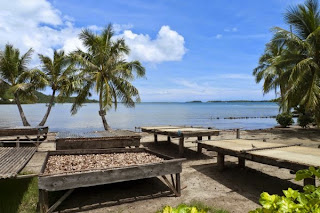 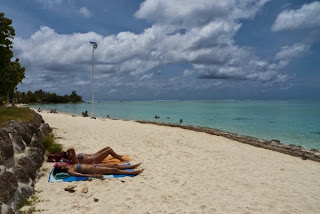 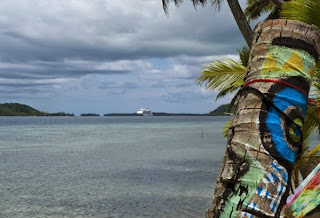 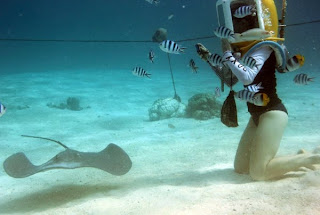 While Tracy was having a fabulous time doing an "Aqua Safari" in the lagoon – strapping on a Jules Verne style diving helmet and walking around the lagoon floor surrounded by so many frenzied fish; I was doing an off-road adventure, up into the steep mountains that make up most of the island of Bora Bora.

As we bounced along the pot-holed roads of the main town Vaitape, we joked that we were already experiencing an off-road adventure; however, the tracks that we were to be taking up into the mountains must have been some of the roughest terrain I've ever driven on. Not only were they steep and unpaved, but they were heavily rutted, covered in boulders and about as uneven as you can imagine.

We held on for grim death as we did our best not to bash our heads on the roof, or to be tipped out of the back of the jeep – it was quite literally a white-knuckle ride around the island. However, the lush scenery was beautiful, and the views from the top across the blue lagoon and over to the little off-shore motus made all that bumping and jolting worthwhile.

We visited some of the enormous gun emplacements left over from the Second World War, when this island paradise was turned into a heavily fortified base for the US Navy. How they managed to get those huge iron guns up the top of these vertiginous ridges must have been an amazing feat of engineering and logistics.

It was those years of American occupation that totally changed the fortunes of the island. Not only did they give the island the infrastructure of roads and the airport that it still relies on today, but they brought it to the world's attention with their tales of Bora Bora as an idyllic South Pacific paradise.

From any angle, that view of Bora Bora as a paradise still holds true today – great scenery, wonderful white beaches, and amazing sea life in the beautiful lagoon. Plus the modern infrastructure of swanky holiday resorts has turned this into an exclusive playground for the rich and famous, although the fact that four of the island's 16 resorts have gone bankrupt in the last few years, goes to the show that not everything's fine here in paradise.

French Polynesia has certainly delivered on all fronts over the past week – on land and sea, up in the mountains and under water, in quiet seclusion or in busy towns, in simple pleasures or in sophisticated resorts – this scattered territory has all the ingredients for vacation heaven.