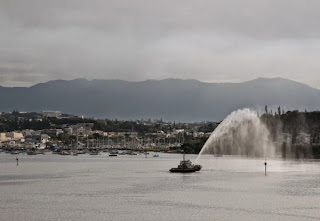 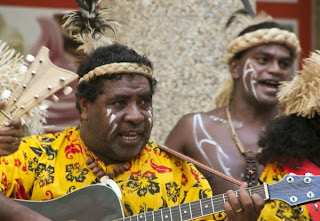 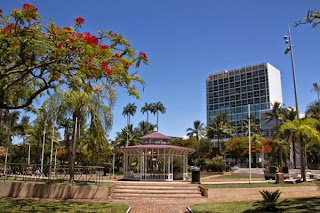 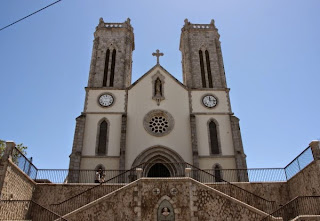 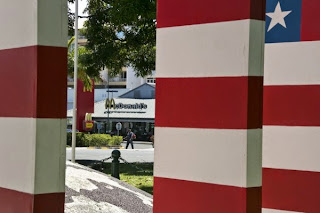 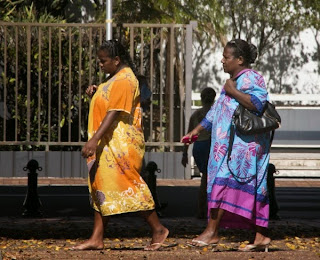 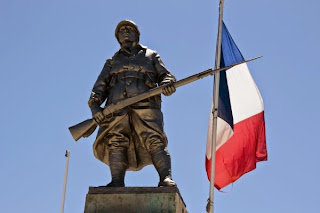 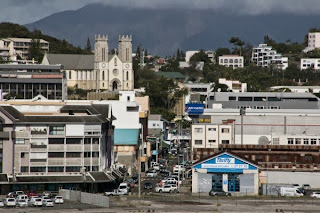 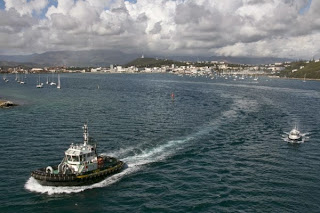 Where and what is New Caledonia?, I hear you ask. The short answer to the question is that it is a French Overseas Territory in Melanesia, about 900 miles off the Australian coast. As we explored this interesting slice of France in the Pacific today, we got a longer answer.

As we sailed into our port of call, the capital, Noumea, we immediately got an insight into what makes New Caledonia tick. We passed by attractive sandy bays that are turning the island into a holiday destination; we could see a large town equipped with modern buildings and French supermarkets; and in the distance, we could see the smoking chimneys of the town's rather ugly nickel smelting plant. These elements rather summed up the territory – it's a well developed place with a strong French accent that's increasingly becoming a tourist destination, but one that has the luxury of its large nickel reserves to give it a high standard of living.

This wealth has meant that the territory is strongly considering going it alone and getting independence from France; although the debate is not as cut and dried as that. Because, the local Melanesian Kanak population only make up about 45% of the population, while white ethnic French people make up about a third of the population (with Chinese, Vietnamese and other Polynesian people making up the balance). So, at the moment, it seems that the majority of people (by a small margin) want to maintain its links with France.

The presence of so many white people here in the capital, and its well developed infrastructure mean that Noumea has a lot of the feel of a modern Riviera town, although the extreme tropical heat and the presence of plenty of Kanak people (many of the ladies looking lovely in their colourful "Mother Hubbard" dresses introduced by the missionaries), gave the place a strongly South Pacific feel too.

As a lot of things are closed on a Monday, there wasn't so much to do here, so we decided to chance our arm to see if we could sneak into the Tjibaou Cultural Centre to take a look at its amazing architecture. Having got the bus there, we pleaded with the security guards to let us in to take a few snaps of one of the most impressive pieces of architecture in the South Pacific, designed by Renzo Piano (of Pompidou Centre and the Shard fame). Unfortunately, we couldn't find much generosity of spirit from them, so we had to make do with a few tantalising glimpses over the top of the trees.

On getting the bus straight back into town, we decided to walk to the closest beach, the Baie de Citrons – a fairly long walk in the baking heat, although the sea breezes did cool us down a little. The beach was lovely, and there were plenty of bars and cafes for us to take shelter from the sun. Just to show how much more developed this place is compared to the more rough-and-ready Pacific islands we've visited so far, most bars had fast free wifi to use, so we were able to catch up on a few jobs.
It was way too hot to walk back, so we enjoyed the air-conditioning of the bus back into the centre of town, before having a bit more of a wander – checking out the pretty expensive prices in the supermarket.

So, if you don't mind high prices, hot weather and a bit of isolation, then I think that New Caledonia must be a pretty good place to live (to me, it definitely seems more "liveable" than either Tonga or French Polynesia). There's an enticing combination of exotic Melanesian culture and French organisation, in a place of fairly high standards of living – whether this will all change if they decide to go it alone remains to be seen. I wonder what the future holds for New Caledonia?