On a day of constant rain and chilly temperatures, it's safe to say that Tokyo was not looking its best for our final day in Japan. Plus, the congestion and disruption caused by the Tokyo Marathon being staged today meant that it was not going to be easy to sample too much of this high-energy city.

The best option was to stay inside and under cover as much as possible, so we caught the Metro to Shinkjuku, Tokyo's high-rise business district to see what we could discover. Fortunately, many of the retail and food options here were underground, so we didn't have to brave the elements too much.

In spite of her protests that we wouldn't be able to see anything through the rain, I persuaded Tracy that it would be a good idea to go up to the Observation Deck on the 45th Floor of the Metropolitan Building. Well, it turns out that on a murky rainy day in Tokyo, amazingly enough the visibility is indeed terrible, but we did get a bit of a better sense of what a massive sprawling city this is – actually not nearly as high-rise as many people expect. Just to rub it in, one of the guides helpfully showed us a picture he'd taken last week, of perfect visibility, with Mount Fuji in the background. However, the good thing is that the Observatory is free, so we didn't lose any money by not actually observing very much.

So, given the fact that the weather only seemed to be getting worse, we went back down underground, did some shopping and did some eating – seeing as half of Tokyo seemed to be doing the exact same thing, I think we made the right choice. 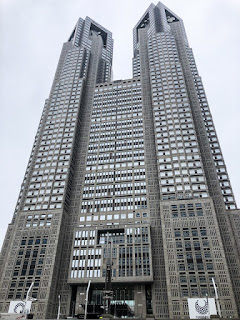 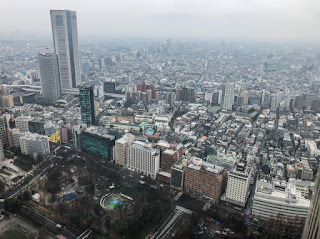 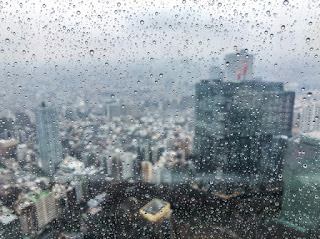