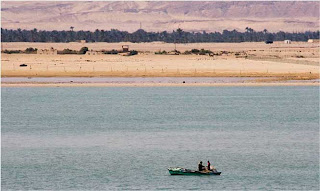 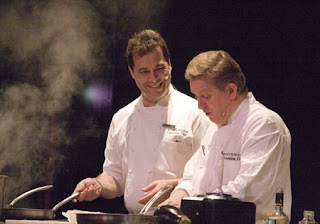 This was to turn out to be the strangest transit of the Suez Canal.

We were meant to be entering the Canal at 7am, which would have given everyone a day of enjoying the views through the most important and busiest waterway in the world. Instead, for some reason, the Canal authorities got us to enter at around 3am, which meant that we'd already done half the transit before people had woken up. But, when we did wake up, it was hard to tell that we were in the canal at all – thick fog meant that you could hardly see the edges of the canal, never mind the desert, towns and monuments that line the canal.

Then, just as the fog was lifting, they made us anchor up in the Great Bitter Lake (one of the natural stretches of water that the canal links through) for around 6 hours, while the convoy that we were originally meant to have been in, finally caught up with us. This meant that it was getting dark by the time that we eventually started moving again – so really, there wasn't much to see.

Instead, people had to put up with two scintillating Destination Lectures on our upcoming ports, and also a cooking demonstration by the chefs, cooking up a storm with the ingredients that we'd bought in Alexandria the day before.