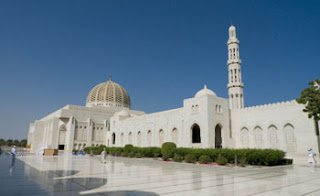 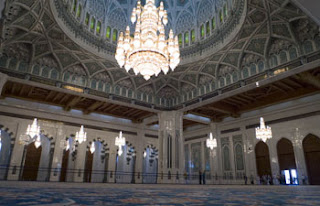 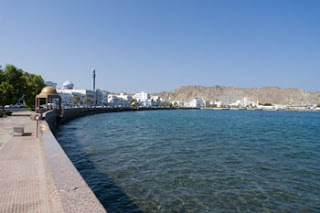 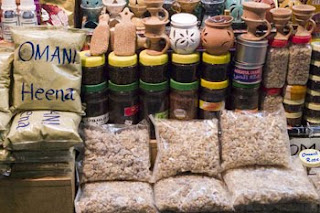 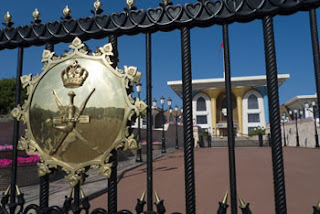 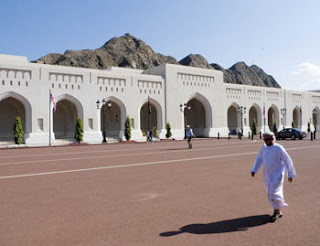 Muscat has got to be one of the cleanest and tidiest cities in the world – an impact that was even greater having come from rubbish infested Egypt, which is full of discarded plastic bottles and bags, blowing about the dusty streets. Here in Muscat, armies of Indian workers are constantly busy brushing the pristine streets, watering the lush lawns, and tending to the colourful flower beds. Things were possibly even cleaner than normal because the Queen was due to visit in a couple of days time – it was nice to see Union Jacks flying everywhere next to the Omani Flag.

We visited the enormous Grand Mosque, the 4th biggest mosque in the world, with the second largest carpet in the world and the most expensive chandelier in the world (containing over 600,000 Swarowski crystals. It was an impressively opulent and cavernous building that must be quite a sight when full of worshippers (apparently it can accommodate over 20,000). The mosque was bumped down to Number 4 in the world by the Grand-er Mosque in Abu Dhabi which we'll be seeing in a couple of days – it will be interesting to compare and contrast.

We then went to Mutrah Souk, which was full of the usual Arab fare – gold, silver, pashminas, spices and daggers – plus Oman's most famous historical export, frankincense. After this, we went into Muscat's spotless and ordered old town, to view the sumptuous Royal Palace, where Sultan Qaboos will be receiving the Queen.