November 16 – Luxor and The Valley of The Kings 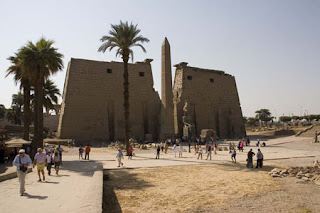 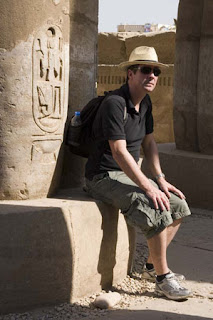 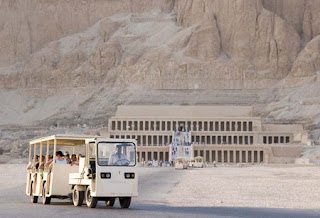 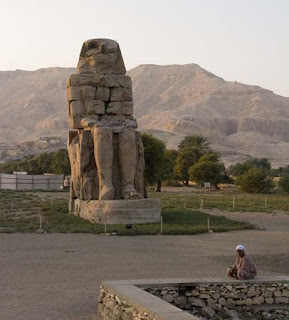 I'm pleased to report that there's been no ill-effects so far to yesterday's rogue pill – I haven't yet turned into a woman, and all other bodily functions appear to be working as normal (or as normal as they've ever been). Which is just as well, because today, we have to get up at the crack of dawn for an exhausting 13 hour trip to visit Luxor and The Valley of The Kings.

So, from the less-than-inspirational Red Sea port of Safaga, we travelled for 3 and a half hours across the wilderness of the Eastern Desert, to reach the thin strip of green fertile land alongside the River Nile. As soon as we got to "civilisation", we could see that Egypt has slipped a long way back from the height of civilisation that it experienced under the Pharaohs. Rubbish was strewn all along the irrigation canals, and the bloated bodies of a dead donkey and a dead cow were seen floating along the source of water for thousands of people – a more modern version of "Death on the Nile".

But, our introduction to Luxor was a strong hint at the magnificence of Ancient Egypt. We arrived at the impressive Temple of Luxor, with its huge pylons, lines of ram-headed sphinxes, rows of towering columns and one lone obelisk (the partner to this obelisk now stands in the Place de Concorde in Paris – the wily French swapped it for a clock which never worked).

After lunch we moved onto the Valley of the Kings to visit three of the tombs of the Pharaohs. You're not allowed to take cameras into the Valley, so you'll have to take my word for it that the vivid colours and quality of the wall paintings inside these atmospheric tombs were breathtaking. It didn't take much for them to be literally breathtaking though, because as you descend inside these long and mysterious chambers, it gets steadily hotter and more airless, as you're being followed around by a "helpful" attendant pointing at a picture of a crocodile and saying "crocodile", or pointing out that what looks fairly obviously like a monkey is indeed a "monkey". They then give you a bit of a torn up piece of cardboard, wave it in your face saying "air conditioning", followed with an outstretched hand and a request for "baksheesh". Needless to say, there wasn't much baksheesh forthcoming from me.

Before our lightning raid on Luxor finished, we had time for a quick photostop at the amazing Temple of Hatshepsut, looking so perfect in the distance that it was like a film set; and then at the weather beaten Colossi of Memnon.

A day of fantastic sights that only makes you want to come back for much, much longer.