November 13th – Down With the Locals in Gran Canaria

Gran Canaria has a reputation of a being a mainstream package holiday resort island – a reputation that's fairly accurate if you head down to the resorts of the south coast – but it's very easy to avoid all this, and soak up the genuine Spanish atmosphere of what's actually a very charming island.

In the morning, we joined a tour that climbed the winding roads up into the hilly interior to visit a couple of inland towns that seemed a world away from the tourist development on the coast. Our first stop was to the beautiful little village of Teror, which is home to a stunning old basilica that's a place of pilgrimage for the devout Canarians. So, being a Sunday, the town was busy with worshippers and families going for a stroll, in an atmosphere that reminded me of inland Andalucia, rather than an island 100 miles off the coast of West Africa.

We then drove past endless banana plantations before paying a brief visit to the town of Arucas, dominated by a grim-looking neo-Gothic church that looked like the baddie's house out of Walt Disney cartoon; before heading back to the big city of Las Palmas.

The great thing about Las Palmas is that it offers something for everyone – one district is full of early colonial buildings and history, another district is packed with shops, while the district we headed over to – Las Canteras – is a series of golden beaches, lined with bars and restaurants. Again, on a Sunday, it was busy with locals sunbathing, surfing, going for a stroll, or eating and drinking. It made for a wonderful atmosphere – a great combination of big city, relaxed holiday resort and genuine Spanish town.

Las Palmas is to be our last sight of land for 7 days, as we now head off for a long crossing of the Atlantic Ocean – what a nice place to have as our last memory of dry land for a week. 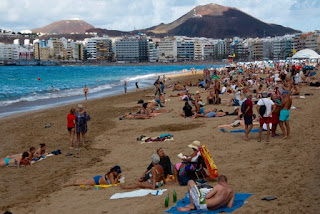 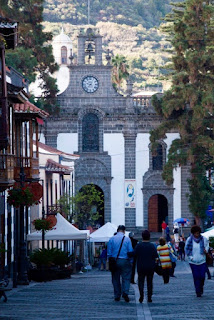 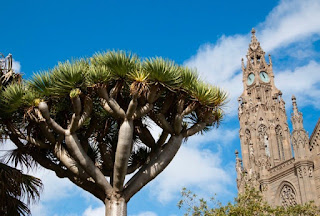 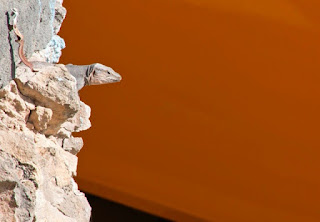 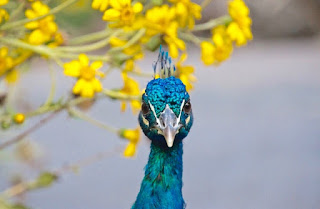 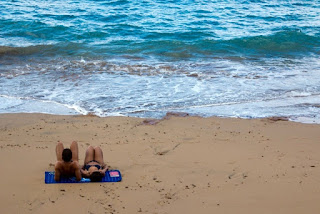