Bangkok can offer a lot of different kinds of evenings. If you want great food, there's so many excellent restaurants that can offer that up. If you want flashy bars and cocktails, then just head to one of the many city's roof top bars. If you want vibrant markets, then there's plenty of neon-lit night markets that go into the small hours. While, if you after the seedier end of the market, then Bangkok has this totally sewn up.

Our time here in Bangkok showed us a little of all of that.

We started off our evening in the iconic Dome bar on the 64th floor of the State Tower – this is the famous roof top bar that featured in the Hangover II. We haven't been there for a few years, and my memory was that it was pretty expensive. Coming back in 2017 proved that prices have gone as stratospheric as the Bangkok skyline. I don't mind paying for a view, but over $21 for a beer was verging on the criminal (especially when that's a huge amount to most of Bangkok's population)!

However, as I sipped my phenomenally expensive drink at glacial pace, the views were indeed spectacular, as Bangkok's growing skyline glittered in the dark, and my stomach slightly churned as I looked over the edge of the bar to the sheer drop down to the bottom.

We next headed to our favourite Bangkok restaurant – Supanniga – where our delicious meal (including drinks) was virtually the price of a beer in the Dome Bar. It was spicier than I remember from last time, and I'm sure that our stomachs will be gurgling the next day.

To round off the evening, we went for a stroll around the Patpong night market. The market was full of life and there were plenty of knock-offs to peruse, but it's the setting that makes it such a surreal experience. Down both sides of the street was a long row of bars – some mainstream, but mostly go-go bars with people exhorting you to see their "Sexy Show" and thrusting a laminated menu of fairly disgusting acts for you to pay to witness.

It was depressing to see so many seedy western men (who would scarcely get a glance from a woman back home), feeling emboldened by the attention of a horribly exploited local girl. Peering through the doorways of some of these bars, you could see cohorts of blank-looking girls in their underwear dancing on stages half-heartedly, or gyrating like sexless automatons whose batteries were running out. It just wasn't amusing, or sexy, or entertaining.

Fortunately, Patpong is just one small part of the Bangkok scene. To me, it seems hopelessly out of date in the modern world, but you don't have to read today's media for long to realise that that sexploitation and abuse of position are probably here to stay.

Anyway, it was instructive to see, and the rest of our evening was good. And, to re-confirm my faith in Bangkok, we even found an honest and friendly taxi driver to take us back to the port without trying to rip us off. Bangkok (especially after dark) often feels like a glimpse into a dystopian future, and today was no different. 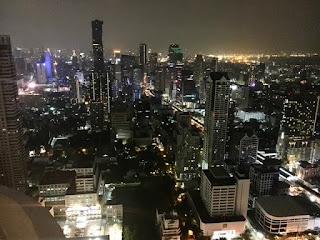 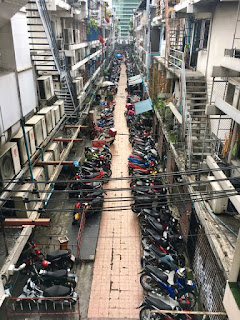 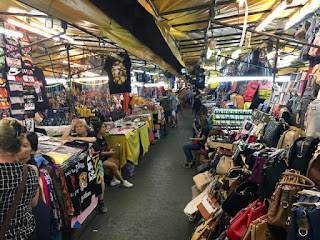