Today we visited a sight to rival Angkor Wat, or Bagan in Burma – the magnificent temple at Borobudur, the largest Buddhist Temple in the world. The fact that this is just one standalone temple, rather than part of a larger complex (like Angkor or Bagan), makes you focus on the fabric of the building and its significance.

Because, there's a real sense of mystery and wonder to visiting this massive temple – it's 1,200 years old, yet it was lost in the jungle for most of its life, before being rediscovered in the 19th century, and then, latterly being expertly restored by UNESCO. The Saliendra civilisation who built this huge and ornate structure must have been incredibly sophisticated in their understanding of architecture, logistics, art, and craftsmanship; yet, within 150 years of its completion, their kingdom and their religion had been pretty much eradicated on Java. It's not quite a mystery on a par with the pyramids, but there's a similar aura to it, and a similar awe inspired by this piece of construction perfection.

The statistics begin to give you the scale of the enterprise, but they don't do it justice. It covers 200 square metres. It consists of 1.6 million blocks of volcanic stone slotted expertly together. Its volume is 2 million cubic feet. It's adorned with 500 statues of the Buddha.

But, there's also a personal element to Borobudur, that draws in the visitor. As you ascend its 9 levels to the top – the journey to the top, represents our journey in life to reaching nirvana – you're brought in touch with the age of the Saliendra by the amazing quality of the friezes carved into its side. You see Kings, Queens and commoners, eating, praying and loving – the level of detail you see is astonishing, especially when you consider that it's been open to the elements for over 1,000 years.

But, just to show you that life isn't meant to be easy, your progress round and up the temple is pretty hard too. It's always incredibly hot and humid here, but the steps up between the different levels are very steep and often uneven. Your visit becomes all about the journey to the top to reach nirvana, following a path of enlightenment that we don't really understand.

As you approach it, the temple appears to be perhaps smaller (and shorter) than you think it's going to be. But, once you're on it and in it, the temple seems to magnify, and you feel tiny. Then, when you reach the top three levels, as you approach nirvana, it kind of opens up again, as you're surrounded by serene Buddhas, and latticed stupas that contain more Buddhas trapped inside. At this point, from the top, you get to appreciate the beautiful scenery that it's all set in – in a bowl of green countryside, surrounded by striking volcanic mountains. It's breathtaking in so many ways.

Tourist nirvana has been achieved. 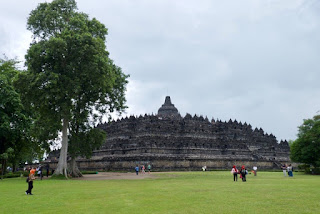 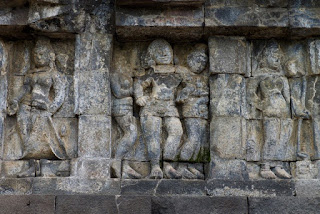 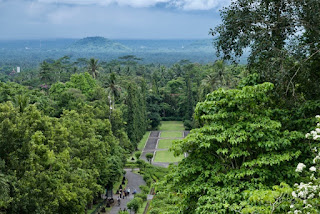 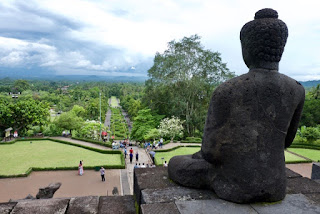 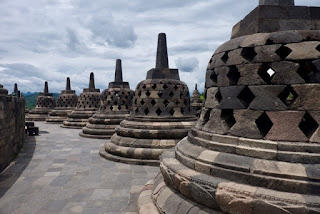 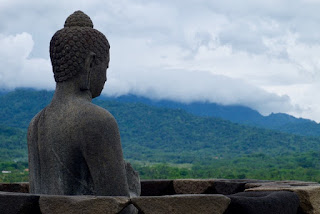