November 23rd – Into The Dragon’s Den in Komodo

If you had to put together a composite of the world's most frightening creature, you'd want it to be a flesh-eating, armour-clad, dead-eyed monster. It would have enormous dagger-like claws that can eviscerate its victims in seconds. Its razor sharp teeth would deliver a deadly poisonous bite that incapacitates, then kills its prey. Oh, and it would be so evil that it regularly eats its young whenever it fancies a quick snack.

The creature that I'm describing might sound like it comes from Tolkien or Arthurian Legend, but it's most definitely real - the utterly unique Komodo Dragon. And, today we were going face-to-face with one of the most fearsome creatures on the planet, as we entered into the Dragon's Lair on remote Komodo Island.

Having got off the tender, our first glimpse of a dragon came surprisingly quickly. There were three of these scary beasts hanging around the National Park office, attracted by the smell of the ranger's food. Admittedly, the setting for our first encounter could have been more idyllic and back to nature, rather than a scrappy bit of soil under a concrete building, surrounded by a couple of discarded beer bottles and plastic bags.

However, there was a real quickening of the pulse at our first sighting, as a huge male (about 10 feet long) advanced towards us with the lumbering walk of a muscle-bound weightlifter, his long forked tongue flicking the air, seeing if there was the chance of some blood to feast on. The rangers were careful to keep us at a safe distance, but we were only a few metres away from these dangerous living dinosaurs.

What contributes to the thrill, is that the rangers are equipped with that most low-tech of dragon-fighting weapons – a long forked wooden stick that scarcely seemed up to the job of seeing off a flesh-eating monster! Plus, in contradiction to every piece of advice that I'd read that we shouldn't wear red clothing (supposedly it gets the dragon's blood lust going), our guides were decked out in bright red T-shirts. Maybe, they would use them to try to attract the dragons away from us if we came under attack?

We then went on a trek through the bush to hunt out some more dragons. Initially, you're constantly scanning the trees and bushes for any marauding dragons, but it became apparent that these beasts are far too lazy to make a charge on us. Instead, they lie around a watering hole, waiting for a thirsty dear or a wild pig to get too close. Seeing as they can eat 80% of their bodyweight in one go, they only have to eat once a week – I was crossing my fingers that they'd just had a hearty meal.

As we sweated our way along the rough paths, we were cooled down by a little tropical drizzle, and we caught a few glimpses of the island's other wildlife – dear, pigs and plenty of birds, but thankfully none of the spitting cobras who like to add to the danger of exploring Komodo. To add to the feeling that we were visiting "The Land That Time Forgot" as we explored the scrappy savanah, we passed by primitive ferns (cycads) that also date from prehistoric times.

Anticipation mounted as we approached the watering hole and we got our first thrilling sight of three dragons lying in wait for us. We were allowed to get within about 10 feet of them, which seemed a little too close for comfort to me, but they were looking pretty somnolent as they lazed there, warming their wrinkly skin in the afternoon heat.

It's fascinating just to observe these natural born killers close up – every part of their body is made for killing. When you see one yawn, just the size of his mouth is scary – he can dislocate his jaws to swallow a whole goat in one go (so, I might make up a couple of mouthfuls).

I got our guide to take a picture of me in front of a dragon (I was a horrible sweaty mess, so that picture has been consigned to the dustbin), but it felt so wrong to turn your back on a dragon. It is probably not a wise move to let a sleeping dragon lie. Just as we were relaxing in their company ("relaxing" like you might when meeting Hannibal Lector in his prison cell), a huge dragon came running up out of the undergrowth. The rangers moved pretty quickly to get the stragglers from our group back together – seeing the seriousness of the rangers kick into gear when things weren't so controllable, reinforced the constant danger of being around dragons.

Finally it was time to leave the dragons, before having to run the gauntlet of the rather desperate vendors selling us cheaply-made, but over-priced dragon-themed souvenirs. I guess it was fitting that their goods should be costing an arm and a leg, seeing as we'd managed to survive our dragon encounter with all limbs intact!

A visit to Komodo island is thrilling, fascinating, unique, enjoyable and exhausting in equal measure. Days like this are why I cruise. 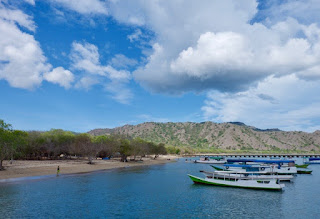 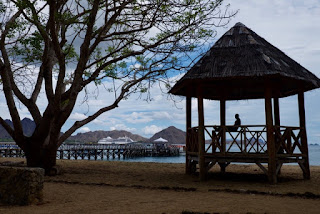 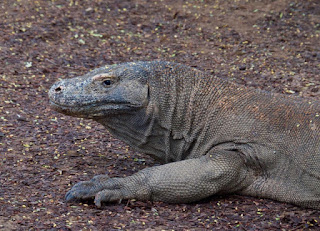 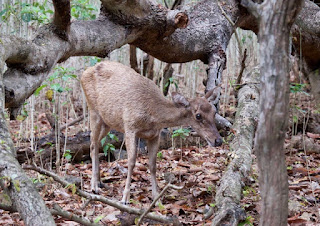 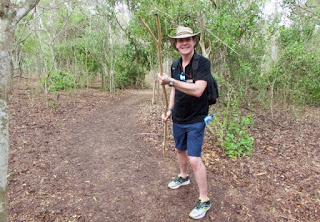 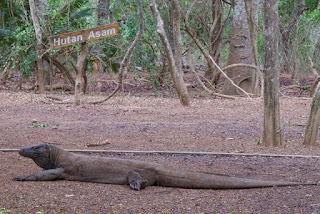 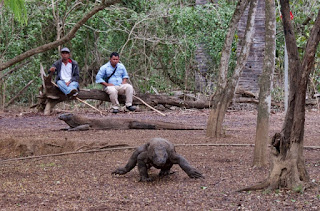 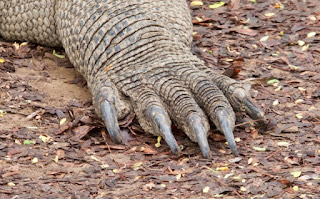 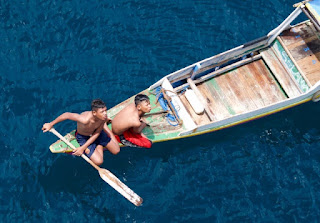