As you sail into Auckland's stunning harbour, the first thing you can make out in the distance is the Sky Tower. This is a city of so many great views, but from pretty much any point in the city - from the water, from its beaches, from its many hill tops - those views are all framed by the Sky Tower. So, today our mission was to see the southern hemisphere's tallest building from close up.Having done a drive around Auckland's many pleasant harbourfront suburbs (all with million dollar views of the waters in front of them), the impression that this must be a good place to live was being constantly re-inforced. Once you were out of the congested CBD, the atmosphere in these relaxed suburbs felt more like they were holiday towns rather than commuter suburbs – although we were told that property prices have been absolutely going through the roof in the last couple of years, so maybe it's not as easy to live here as it might seem.But, all the time, your eye is constantly drawn back to the Sky Tower, its iconic outline overshadowing everything in Auckland. But, rather than just go up to the Observation Deck, it makes sense instead to go to Orbit, the revolving restaurant just above the Deck. The food was excellent, and the cost wasn't that much more than the price of the Observation Deck.It takes an hour to do a full revolution, with the changing views slowly revealing what a large and sprawling city Auckland is – in area, it's twice the size of London, yet it houses one-seventh of London's population. Below us, we could see our ship looking like a toy boat next to the monster-sized cruise ship anchored in the bay (it was too large to even tie up in the port).As we enjoyed our meal, the serene views were occasionally interrupted by the sound of a muffled scream, and the blurred glimpse of one of the lunatics plummeting past the window who had paid good money to jump off the top of the building. The "Sky Jump" is an assisted fall, so they don't reach terminal velocity, but from the sounds of terror you hear from its victims maybe the biggest danger is from suffering a heart attack before you get to ground level. In the morning, I had made brave pronouncements that I might do a jump myself, but having got to the top I quickly made sure that I shoveled in as much food as possible, so that I was now "too full" to attempt it.So, after our lunch at altitude, we walked back down Queen Street, Auckland's main shopping street, before heading to Viaduct Basin, the main yachting centre. From the Sky Tower, you could see how much development and building work there was going on around the waterfront, as Auckland readies itself for hosting the America's Cup next year; and at ground level, it all looks pretty impressive. There's a massive choice of bars and restaurants down there, and from the number of luxury apartments being built all around, they should be pretty busy. Having a cold beer as the sun goes down, with the sparkling water in front of you (and of course with the Sky Tower behind you), once again you're thinking – life is good in Auckland.Today proved that on a sunny day, Auckland looks good from all angles. 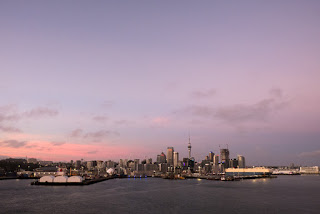 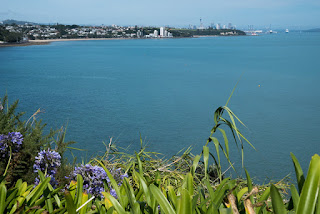 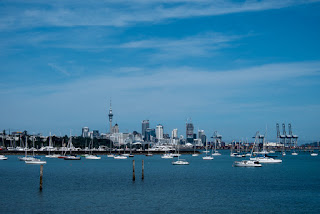 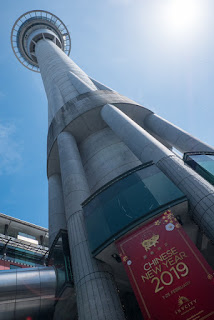 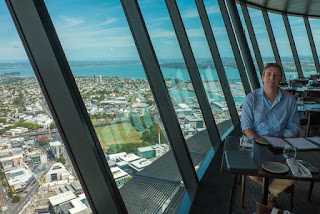 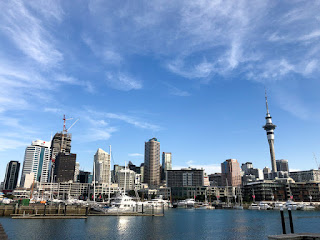