Darwin in the Top End of Australia is a city that always has a remote, frontier feel to it – but, it's when you see it from the air that you fully appreciate that this place sits in complete and utter isolation.

On the one side, you have the sea – it looks inviting, but it's inhabited by so many man-eating crocodiles and sharks that Darwinites are afraid to get back in the water. On the other side, the city is surrounded by wetlands and dense green wilderness where you scarcely see the imprint of man.

I was invited to join a couple of super-generous friends who had hired a helicopter for the day, so I was able to get this unique perspective on the Northern Territory. We did a circuit over the harbour and flew along the coast. From up there, it looked as beautiful as the beach-lined coast we had seen north of Sydney. Yet here, there were zero developments along it.

There are a number of reasons for this:

Firstly, the climate here is so oppressively hot and humid, plus the soil is so thin and sandy, that the area is just not suited for either industry or agriculture.

Secondly, pretty much all the surrounding land belongs to the local aborigines, who zealously guard their traditional land from any development.

Thirdly, there are crocodiles everywhere. From a low of 5,000 in the 1970s, there are now thought to be 150,000 crocs in the Top End (more than Darwin's population). Over 400 crocs were removed just from Darwin's harbour last year – most going to the crocodile farms to be turned into handbags and shoes.

As we zoomed towards the Litchfield National Park, it was the huge open landscapes that struck me – stretching for miles were wide open expanses of green forests and wetlands spreading across a largely flat floodplain, interspersed with undulating hills. Our pilot sought out fields of "Magnetic Termite Mounds" – hundreds of grey tombstone-shaped termite colonies, looking like spooky abandoned cemeteries. We saw lines of huge "Cathedral Termite Mounds" – termite skyscrapers up to 4 metres high. We swooped over cascading waterfalls, and we buzzed over wild buffaloes running through the waterlogged fields.

We called in for a drink at a resort on a picture perfect white sand beach, (which didn't look quite so idyllic when we saw the "Beware of the Crocodile" signs). And lunch was in an Outback pub that surprised us with how good the food was for an out of the way place like this – to be honest, just a cold beer on a bakingly hot day would have sufficed.

Our last few days in Australia have shown me that this country looks pretty good for the ground, but from an aerial perspective, you get a much better sense of the sheer scale of the country, and for its magnificent array of vistas. It's cities are pretty great, but they're just a small part of what this utterly vast country has to offer. 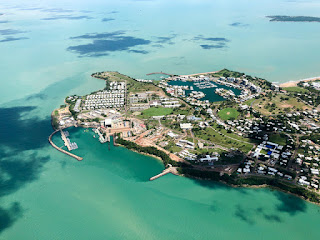 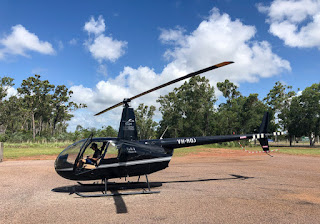 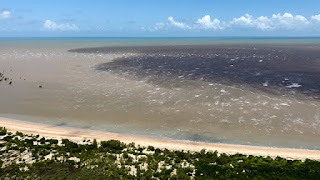 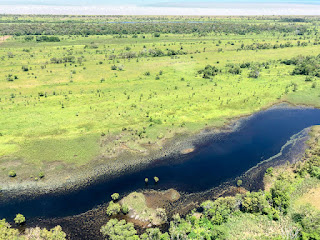 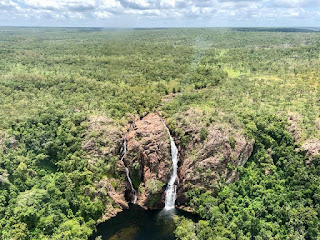 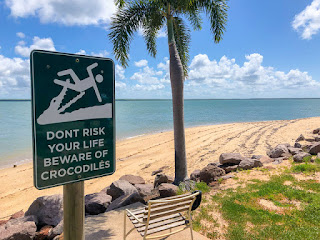