When you're looking across at the feeding platform, as the orangutans work their way through a bunch of bananas, there's something compelling about their remarkably human behaviour and characteristics – you just can't take your eyes off them. They do share 97% of their DNA with us humans after all.

As I watch, I spend my whole time giving them human emotions – as they jealously guard their food from each other, they mischievously poke each other, or angrily push away the one who's been annoying them. Then, when you look across at their soulful eyes, you decide that they have a touch of sadness about them – undoubtedly a reaction to their natural habitat being endlessly destroyed by man.

Actually, the orangutans here seemed to be on pretty fine form, giving us heavyweight gymnastic displays as they swung down from the trees, that left you in awe of their strength and acrobatic abilities. Seeing the infant orangutans in the nursery was incredibly entertaining – constantly annoying and wrestling with each other like a group of human siblings. Every now and again, the handlers had to step in like teachers, to separate the naughtiest children. Just incredibly entertaining to watch.

After the Orangutan Sanctuary, we walked across to the neighbouring Sun Bear Sanctuary, just as the heavens opened and the RAIN-forest well and truly lived up to its name. With sightings proving elusive, I speculated that maybe because he's got the "sun" name, the bear doesn't like to come out when it's raining – however, it appears that this mainly black bear gets his name from a patch of light fur on his chest which supposedly looks like the rising sun. Actually, in spite of the name, the bear is mostly nocturnal, which explains why the fleeting glimpses that we got were mostly of bears sleeping in the undergrowth.

These small bears are about half the size of the American bear, and the most interesting fact I found out about them is that their skin is so loose, that if they are caught be a predator, they can somehow turn around within their skin and attack their attacker. I'm currently eating so much on this cruise, that I have plenty of spare flesh that might help me do the same in an emergency.

I got quite a few shots of bear backsides, so I have to admit that Tracy's pictures of the proboscis monkeys that she saw elsewhere are much better than mine.

Sandakan (our cruise port) as a town might not have much going for it, but the chances to view Borneo's unique wildlife are just amazing. Another wonderful day. 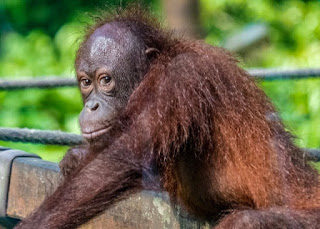 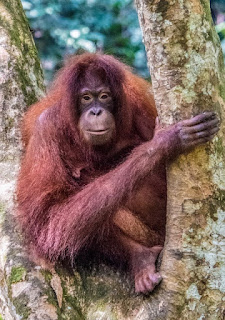 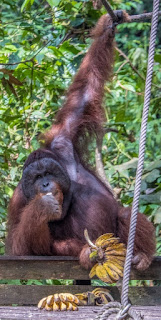 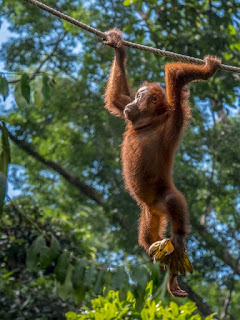