If you had to put together your list of Asia’s Top 100 cities, I doubt whether the unspectacular port city of Kaohsiung in Taiwan would get close to it. This may be Taiwan’s second largest city and the 13th busiest container port in the world (not normally a recipe for urban beauty), but there’s not a great array of must-see sights on offer here.

However, once you’ve lowered your expectations accordingly, and you’re prepared find pleasure on the city’s more provincial offerings, you find that Kaohsiung is actually a very pleasant and relaxed city to explore. In an overwhelmingly modern city, the architecture isn’t exactly amazing (apart from the tall 85 Tower peering out of the hazy pollution), but with its wide streets and mostly low-rise layout, the city has a spacious feel to it.
We caught the subway from the rather grass-less Central Park, up to Zuoying to see the Lotus Lake with its collection of temples and leisure facilities. The metro was quite crowded, but it didn’t have a pushy feel to it – people were constantly giving up their seats to people older than them, and everyone was incredibly polite. I think you can tell a lot about a city’s level of sophistication from its public transport system, and Kaohsiung seems to be pretty advanced.As we walked from the station to the lake we came across a really lively street market selling all kinds of colourful fruit and veg, meat and fish. Again, everyone was really friendly (even though hardly anyone spoke English).The lake itself is probably the city’s most picturesque sight, surrounded with lots of different temples – the highlight being the modern Ciji Temple, where to ensure good luck, you enter through a giant dragon’s mouth, and leave through a tiger’s mouth. In other tourist cities, this wouldn’t rank too highly on a list of must-see sights, but here in Kaohsiung it made for a pleasant place to visit.We caught the Metro back to the Formosa Boulevard station in the centre of town – apparently, this station has been voted “The Most Attractive Subway Station in the World” (who votes for these things I don’t know), and it is indeed a very attractive station – underneath a colourful dome of light, looking a bit like a Tiffany lampshade.As we recovered from the excitement of this attractive station, we decided to walk through town back to the ship, taking in the re-developed riverfront, and passing through the old warehouse (Pier 2) district which has been turned into an artsy area of galleries, restaurants and art installations. While the centre of town had been pretty quiet (we were told this was because it was the end of Chinese New Year), Pier 2 was full of promenading families and groups of well-behaved young people enjoying themselves.Kaohsiung may not be a thing of beauty, but it’s a thoroughly agreeable place to explore. What kept on striking me was how different this place is from mainland China – much more polite, people have a better idea of personal body space, and a much more egalitarian atmosphere than its (supposedly Communist) big brother. If China ever does get its way, and Taiwan becomes part of the People’s Republic, it would be interesting to see how it gets integrated. To me, Taiwan is Chinese, but it’s not China. 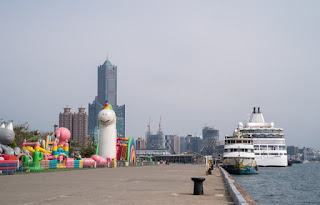 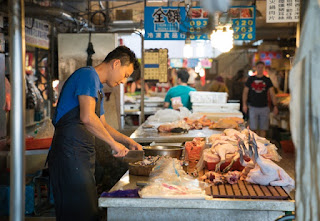 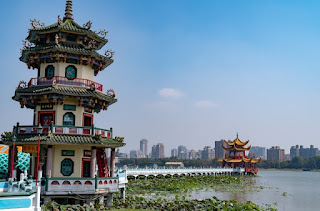 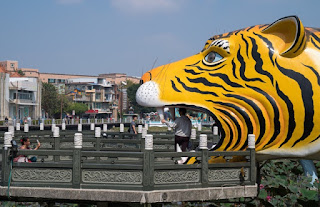 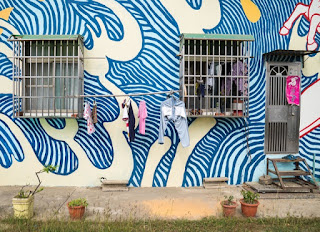 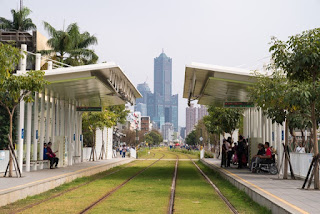