July 17th – A Sting in the Tail in Mykonos

If there’s one place we’ve been to on this cruise where it feels like the pandemic never happened, then it’s Mykonos. This has always been something of a no-holds-barred fantasy island – where no club is too hedonistic, where no price is too high, and where you can never wear too little clothes. But, today it felt like the fearful world of Covid had never happened.

Mykonos Town’s labyrinth of pretty little alleys seemed as busy with tourists as ever; the shops were totally focused on people who must have forgotten to pack any clothes or jewellery with them; while, there was more bare flesh on display in town than you’d expect to see on a busy beach. It made you wonder how the locals cope – bakeries here can only call themselves as “patisseries”, and every shop tends to class itself as “luxury” no matter what it was selling. In every other island we’ve visited, a typical Greek salad has cost 6 to 7 Euros, here we were seeing them for 16 Euros.

But, the name “Mykonos” has become synonymous with Greek island luxury at its best and that’s what people come here for. It has some of the best beaches in Greece, the restaurants and beach clubs are excellent (if ridiculously expensive), and if you want to consume conspicuously then this is the place to do it.

Every 15 minutes, another ferry would drop off hordes of scantily clad fun seekers, while flight after flight was touching down at the airport – as I said, the pandemic seems to be a distant memory (even if Greece seems to be tightening its controls as we speak).

We joined in the parade of beautiful people around town, wandered through the maze of picture-perfect streets, and had a waterfront drink in the only place that looked like it was more aimed at the locals rather than the Jet Set.

After lunch, we went for a swim at Aghios Stefanos Beach, about a 15-minute walk from the ship. We’d scarcely got on the road, when a driver started honking at us furiously. We thought we were being told off for walking on the road – instead she was offering us a lift! It was refreshing to see that the traditional Greek hospitality hadn’t been lost in Mykonos’s tourist boom.

The beach itself was lovely – soft white sands and unbelievably clear seas (which were maybe a little more refreshing than we’d expected, but great once you’d got in). However, just as we were thinking that life couldn’t get any better, I saw Tracy thrashing around like she was a bit part in Jaws just about to be eaten. It turned out she was being stung by a jellyfish. Being heartless, I chuckled to myself that she must be making it up, until I too got stung. We then joined the queue of people (children mainly) to get some bite cream from the long-suffering lifeguard who was doling it out like there was no tomorrow.

That jellyfish was like a metaphor for the last 16 months – just when you think life is getting back to normal, something comes along and bites you in the ….. arm (in this case). I hope that the fact that the pain stopped fairly quickly and was forgotten about in an hour or so is a good sign….. 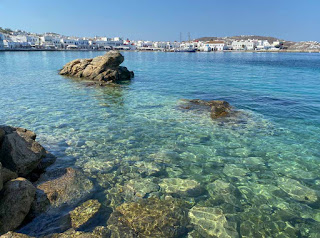 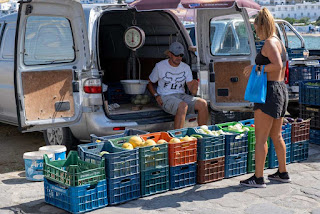 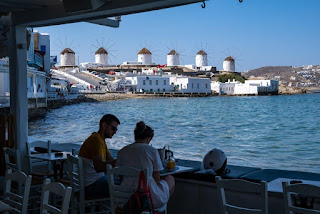 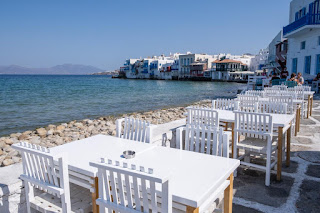 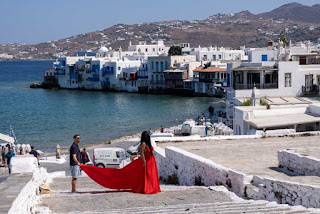 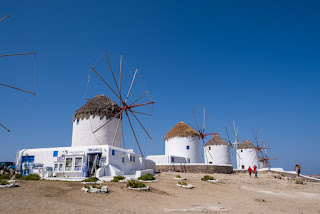 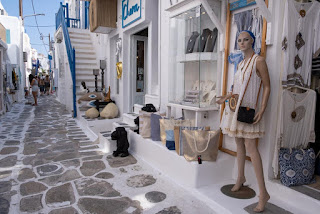 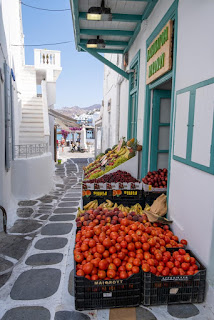 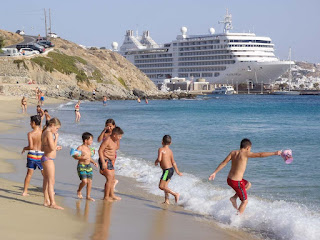