There are many sides to Cyprus – beaches, tick; ancient ruins, tick; modern resorts, tick. Well, today was the time to see something different – heading up into the mountains to see some relics of the Byzantine Empire, a group of historic churches and chapels that have been designated a UNESCO World Heritage Site.

Our tour took us up over 800 metres above sea level into the Troodos Mountains, the scenery changing from parched yellow fields, to green pine forests. Fortunately, this section of the mountains was unaffected by the terrible forest fires that have ravaged the hills on the other side of Limassol, so its heritage of beautifully preserved medieval churches has survived.

These are only tiny little churches, but they display some remarkable frescoes from the time when the Byzantine Empire was culturally and artistically some distance ahead of western Europe. Unfortunately, photography is banned in these churches, so you’re going to have to take my word for it.

Our first church, Panagia Podithou was from the 15th century, a period when the rest of Europe had caught up – some frescoes from the period of Venetian occupation showing way more depth and emotion than the rather stiff Byzantine ones around it. But, the beautiful Aghios Nikolaos Tis Stegis church (named after its odd double-roofed structure), was a wonderful example of Byzantine artwork. Every wall was covered in frescoes which dated from the 11th century to the 17th centuries. They were so good that it was torture being unable to take a photo of them – although, maybe it made me concentrate more on them as I tried to commit them to memory.

We ended up in the hilltop village of Omodos for lunch – usually the narrow streets are heaving with coach parties, but today it felt like we had the town to ourselves. We stopped in at the Monastery of the Holy Cross, where a tiny off-cut of the True Cross was being proudly displayed on the iconostasis – apparently it was dropped off by St Helena in the 4th century on her Mediterranean cruise on the way back from Palestine.

So, while the lack of visitors last week made Limassol a little depressing; it made exploring the rest of the island this week much more pleasurable. It’s not often that you have a UNESCO World Heritage Site to yourself – a wonderful experience. 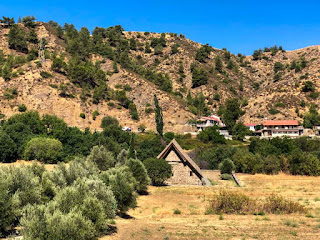 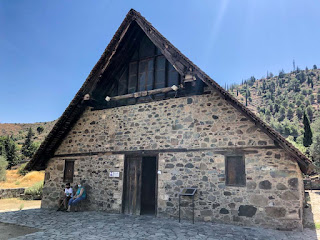 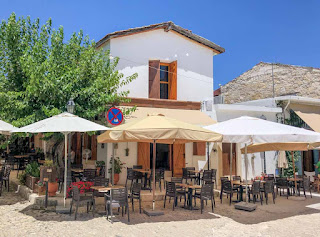 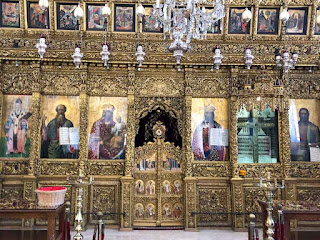